In 1983 – for you English Lit majors, 30 years ago – I joined the creative department of a small agency in Richmond as hire #10 or so. I went on to work at medium-sized and large agencies, but my time at the Martin Agency I remember with particular fondness. For students waffling between big versus small – both have their charms – today is about small. 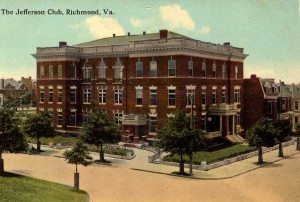 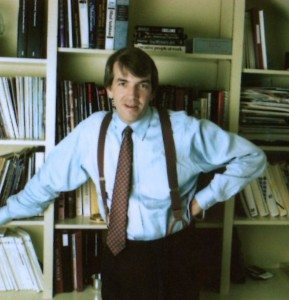 This is the original building at Lee Circle where I first met Mike Hughes, best boss I ever had. (To our great shock, Mike died this last December 15th.) We ten creatives whom he oversaw worked on the third floor, which was an old ballroom. The biggest client at the time was Barnett Banks and while I don’t remember their billings, we did maybe two TV spots a year, buncha magazine, and too much radio. (Today their big account is some company called Wal-Mart.)

In those days, creative teams weren’t as common and everybody pretty much worked with everybody; and everybody knew everybody, and not just in the creative department but all over. If I were a new staffer at some big-ass shop in New York, I doubt their president woulda walked up to my desk – like Don Just did – to whisper, “Psst, we’re takin’ the timeshare jet to Palm Beach for the weekend and stayin’ at The Breakers.” (What followed was kinda like Spring Break, but without the youth, beauty, or sex.)

Not all small agencies were as fun as Martin was in the ‘80s. Come to think of it, it was probably the crazy decade of the ‘80s that got us nuts. Nah. It was us. We were crazy. Well, maybe five of us were crazy. Okay, I was crazy.

We’d gather almost nightly in one area bar or another, and not just Martin Agency people. The creative departments from other city agencies (Siddall, Matthus & Coughter, Lawler Ballard, Ford & Westbrook) gathered at joints like Humphrey’s, Jay’s, Strawberry Street Café, and Joe’s Inn; the last of which still has some of our brain cells on the ceiling, plus I think Mahoney left an open tab there.

Cynicism and sarcasm were the coinage of our realm, and we encouraged leaning into people’s cubicles to insult their work, looks, age, sexual orientation, whatever was handy. Insults were so common on the third floor they were the default setting of all hallway greetings. In fact, to signify you actually had something nice to say to someone, you had to lean in, speak, and then back away with two raised and open hands. (“I’m unarmed, not a threat.”) 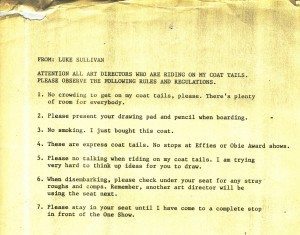 Sometimes blanket insults were called for, such as the time I tacked this list to the third-floor bulletin board. It was for all “my” art directors, a list of rules about proper behavior while riding my coattails to the One Show. (My favorite being rule 5, somethin’ about, “Be quiet, I’m trying to think up here.” Boom!)

Though Richmond was a small ad town back then and never made the New York Times (well, once) we all wanted to crush each others’ dreams in the local ad competition, burn their pathetic villages, and leave their old women wailing in the streets, “Why do we suck so much?”

Actually we were all great friends and we’d help any and all with concepts and share our ideas scribbled on bar napkins. In fact, it was the napkin-layouts that gave my friend Cabell Harris the idea for Drinking Buddies Advertising and the logo. I managed to save only a piece of the stationery but the business card was cooler; an actual napkin with ad scribbles on it. (Oh, and the Martin Agency toilet paper? That’s from the bathroom during a party at an agency across town, Westbrook Inc.) Also pictured below is the entire creative department of Drinking Buddies Advertising. (Cabell, me, Danny Boone at the Strawberry Street Café branch office). Like Martin, we were a small agency too; we just didn’t have a health plan. (No wait, we did. “Try to switch to filtered cigarettes and always eat the fruit in your drink.”) 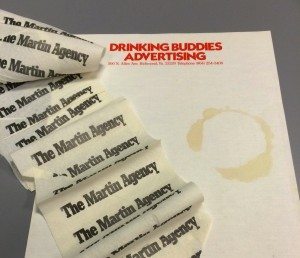 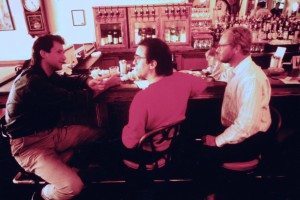 Our good boss, Mike Hughes, somehow put up with all this foolishness and freelancing, as he had only to peek out his office to see we worked pretty hard at our day jobs. Still, I’m not sure any of it woulda been possible at a big-ass agency (or under a different creative director). 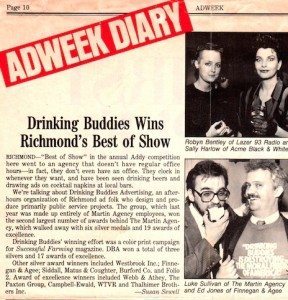 There are more stories to tell another day. For now I’ll part with these last two pictures, both of me and Cabell Harris. It clearly shows what horrible things 30 years in the business can do to a person. Forgive me for leaving out all kinds of wonderful Martin Agency people, but that core group, you guys know who you are: Andy, Cabell, Christi, Danny, Diane, Hal, HV, Jane, Jerry, Mahoney, Russ, Tyson, and Wayne-us. I love you guys.) 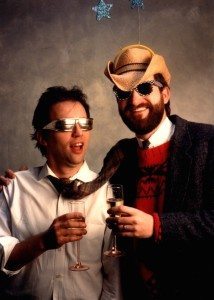 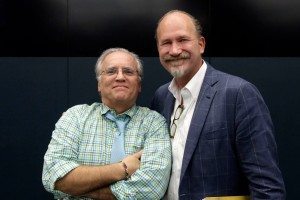