“Dudes! Come in here! Look at my computer screen!”

That’s me in the year 1990 and the amazing “Flying Toasters” (Figure 5.6a) are making their first appearance on my 128k MacIntosh computer and its butt-kicking 8 MHz microprocessor. At the time, this soon-to-be-ubiquitous screen saver was pretty much all it took to amaze knuckleheads such as myself.

Hey, no laughing. Beyond a few word-document retrieval sites, in 1990 the Flying Toasters were “content.” At least they were better than that grainy-ass picture of Felix The Cat which comprised the first “show” on television. (Figure 5.6b) You’re not missing anything with this still photograph either; that’s all it was – a shot of a stupid cat.

It has been interesting, my career, straddling as it has the years before and after the web. Interesting too has been the evolution of all the content available in the media.

In 1994, TBWAChiatDay’s Lee Clow was our speaker guest at Fallon’s creative retreat. We met at an old hunting lodge on a lake in northern Wisconsin and to this day I remember Lee leaning against the fireplace as he talked about Apple, examining the changes wrought by this amazing company and what it all meant for traditional creatives like us.

“Throughout history, the technology always comes first. It’s just technology for awhile,” said Lee, “until the day we artists inherit it.”

Lee was right. When television first came along, pretty much all the content and commercials sucked – (“I’m head over heels in Dove!”) — but people loved it because it was cool new technology. (“Honey, look. It’s Felix!”) No one knew what we were missing until artists began to inherit the medium in the ‘60s and realize its larger potential. Same thing happened in years previous with radio. Today we find ourselves in a digital era when the artists are beginning to fully inherit the technology first wrought by Tim Berners-Lee.

Consumers are also inheriting technology and theirs is giving them more control over all this same media. What started with a TV’s on-off button changed to a mute button and then to time-shifting devices like VCRs, then DVRs, and now that consumers have complete control over everything they view on- and offline, it’s fair to ask, “How can a brand get any attention at all?”

This content can be anything; well, anything that’s useful, entertaining or beautiful, to borrow R/GA’s terms again. Content can be a how-to video, a Q&A chat room, blogs, apps, or downloadable video games. Content can be a white paper, a non-PG video, or a ringtone.  It can be almost anything as long as it has either entertainment value or is something a customer will find useful.

As with any commercial creativity, there’s a discipline here and as you sit down to think content, you must have an objective. Why are you making this content? What purpose does it serve?

When ABC Entertainment created content for their show Lost, there was a clear objective: keep the fans involved in the show off-season. In The On-Demand Brand, ABC’s Mike Beson described how they “actually started to bury web addresses in the final episodes of Lost after Season One, that took people to [fake websites like] Oceanic-Airlines.com. It was … content as marketing.” 12

Even insane content like the Skittles “Touch The Rainbow” YouTube series needed to report to a strategy. TBWAChiatDay’s Gerry Graf told me that Skittles’ ’90’s-era TV campaigns had helped Skittles “own” magic, but it was a PG-rated Disneyesque magic that needed some modernizing.  “To bring it up to date we referenced things like Spike Jonze videos with Christopher Walken flying… our own version of magic. A big difference was that, in our world, the magic wasn’t amazing. It was just part of life. Rabbits sing, beards are an appendage, all the magic was a given.”

“Switch Singing Bunny” and “Beard” were in fact two of their most talked-about television spots and these only whet their customers’ online appetites for more magical weirdness. What’s even cooler is that in bringing the campaign to YouTube, BBDO Toronto took advantage of the laptop medium by inviting viewers to place a finger on the screen. A voiceover said: “Touch the rainbow! No, seriously, put your index finger on the screen where the Skittle is. A video is going to start and your finger is going to be soooo delicious.” The videos were built to interact with the presence of a finger “in the scene” and in the most disturbing execution, a cat appears to be licking the viewer’s finger and is pushed aside by a creepy man-cat who does the same thing. (Figure 5.7) 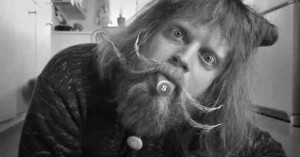 As of this writing, there are a couple thousand delighted responses posted under this Skittles video; from “oohhhhhmyyyygod that was so weird” and “had to wash my finger!” to “favorite video ever!!!”

This particular execution hits on almost all the guidelines out there for creating good content. It should meet a brand’s customers where they are, it should talk to them in their language, it should be extremely useful or entertaining, and if it can require participation from the viewer, all the better. (Check, check, check and check.)

There are thousands of great examples of content online for you to study, content best seen in situ than the pages of a book. You might start with a quick look at Fallon’s BMW Films. This work is credited as being the very first online-only content-driven brand campaign – a series of cool mini-movies called The Hire, shot by A-list directors, starring A-list celebs and the latest BMWs. The breakthrough Fallon made with this idea wasn’t so much the action or plot of the movies but the whole notion that a brand could come up with something so interesting that their marketing ceased to be an interruption and become a destination; a place customers actually wanted to go.

New and better examples of incredible content appear online almost daily now and anything I commit to paper here will date. Yet for the purposes of a short intro course in “content studies,” I’ll direct your attention to these early efforts which are – at this writing – still viewable online:

• Arcade Fire’s music video The Wilderness Downtown: Viewers participated by providing their address. This allowed images from the viewers’ own streets and neighborhoods (pulled from Google Map’s Street View) into the story of the music video.

• The launch of the game Halo 3: Instead of the typical commercial showing the clips of actual game-play, McCann San Francisco and AKQA posted a long video titled “Museum” where viewers could see the game’s epic battles told as back-story and meticulously executed in the style of a museum diorama.

• For the JFK Museum, The Martin Agency created a site called We Choose The Moon which “rebroadcast” the entire flight of Apollo 11 in real time from take-off to splash down.

From these few examples, I see a few house rules to keep in mind as we begin our own work.

The first comes from Skittles’ Creepy Man-Cat. One of his YouTube viewers posted a note saying, “Doesn’t work very well with a touch screen. It pauses the video.” I’m guessing the creative team was aware these videos wouldn’t work as well on touch-screens, didn’t care, and went ahead anyway. (I would have.) Still, it’s a good reminder that as you come up with ideas there’ll be technical realities to keep in mind, such as making sure your idea is viewable from all the devices your customers use. The fancy-pants term for this is being vendor agnostic.

In addition to paying attention to technical differences like Apple vs Android and Flash vs HTML, you’ll also need to design your content for the type of screen it’ll likely be viewed on. Generally, people watch lengthier pieces on the big living room TV screen and “snack” on media elsewhere. For instance, I’m not likely to watch epic movies on my iPhone nor to use a FourSquare app on my living room TV. Given these viewing habits, the rule of thumb is to concept for one overall screen, design for the big screen, and then optimize for the smaller ones.

Technical realities aside, having incredible content is what it’s all about. We conclude here with Doc Searles simple message from The Cluetrain Manifesto: “There is no market for messages.”