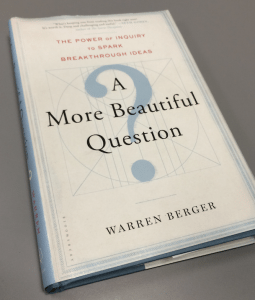 I just finished reading a really good book, a new title from Warren Berger, who’s been writing about the ad industry for a long time. Smart guy.

What Berger calls “inquiry” or “questioning,” I’ve been calling “problem finding.” But I’ve never found as good an explanation for why questioning or problem finding is becoming such a big deal. And I’ll put it this way:

“There was no ‘job order’ for the Beatles’ Sgt. Pepper’s album.”

Don’t get me wrong, many great things have been creative solutions to problems. But the coolest things out there, the stuff that blows us away are things that are answers to problems we didn’t know we had.

When asked if Apple depended much on consumer research, Steve Jobs responded, “People don’t know what they want until you show it to them.” He’s right. I never sat around the house goin’, “If only there were a pocket-sized digital device capable of holding thousands of songs.”

The really spectacular new stuff comes less from problem-solving, and more from the kind of exploration and play that uncovers whole new worlds. (Here’s my new word for that: “Terra mensa incognito.” Chicks dig it when you speak Latin, seriously.)

The reason why this is such a valuable skill is that most brands have the marketing basics all figured out, you know, the blocking and tackling of marketing, they got that stuff down. Agencies that can solve only problems that are handed to them, well, they’re just not as valuable a business partner. Problem-solving is good, but it doesn’t result in sea changes or giant leaps forward. I’m reminded of that cool quotation, “Good advertising builds sales. Great advertising builds factories.”

The author quotes business consultant Min Basadur who says “If you’re able to find a problem before others do and then successfully answer the questions surrounding that problem, you can create a new venture, new career, new industry.”

Berger’s shorthand for the process of problem-finding is asking “Why? What if? And how?”

Why is most music sold as vinyl or magnetic tape? They both degrade.

What if there was a way to store music the same way we store regular old data?

How can we use digital technology to create a new music platform?

As the school year starts, I hope to keep reminding my students that there are plenty of creatives out there in the world who know how to read a client job order and solve the problem. Rarer are the ones whose intelligence is amplified by a consuming curiosity, a curiosity that has them questioning basically everything.