Here’s the most important thing I try to teach my ad students.

I’ve been the chair of the ad department here at SCAD for just over three years now, and I’m all totes cray about teaching. (Totes cray – see how hip you get hangin’ with the college crowd?)

Over these last few years I’ve had the privilege of leading a million in-class critiques. And in all that time, there’s one piece of advice I found myself giving more than any other.

Here’s the thing: The customer has to get what you’re saying instantly, or close to it.  For my money, a quick-get — the Speed of the Get — is the first and the most important thing an idea needs to have. A quick-get matters more than even the creativity of the piece. (I know, heresy.)

For my money, the official order of importance goes

Well, perhaps one could quibble,  “Oh yeah, but if it’s not creative first, then why would readers even look at your stupid idea anyway?” There are probably many erudite rebuttals to this, but mine is just shut up, it’s my blog.

I liken the Speed of the Get to the length of a fuse on a stick of dynamite. You don’t want the fuse to be too short or too long. If the fuse is too short, it probably means your idea is too simple or too stripped-down. It may read quickly but it’ll have little effect on the viewer. Sort of like a STOP sign; obviously an instant read but not something I’m likely to post on Facebook.

Few students however err on the side of too-short fuses. In an effort to create an intriguing idea that requires a little bit of the viewer – which is a good thing – students tend to encode their ideas. But if understanding the idea takes one or two beats longer than it should, FAIL. Because nobody has time to wait around for an idea to go off.  The fuse burns, camera follows it around the corner, everybody loses interest, a minute later somebody hears a distant… pop …  says, “Wait, did you hear somethin’?”

Now that I’ve finally plowed my analogy deep into the ground, I think I’ll spade dirt over it by providing free-of-charge the handy image you see below.

Peace out. (Like I said, I’m very hip now, what with these whacky college kids.) 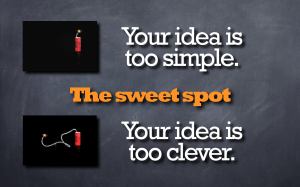