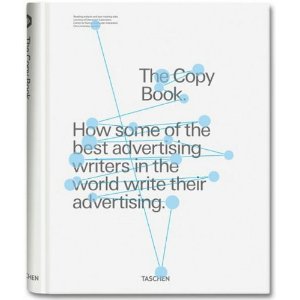 This is the cover of the new book from London’s D&AD, The Copy Book. I am crazy proud to be one of the featured writers. That said, I would  have trouble looking anyone in the eyes and claiming my work should be featured in this book, and not that of my friend Greg Hahn’s. Or Jim Riswold’s. Or Ari Merkin’s.

Ahem … sorry about that … uncalled for. Unprofessional, is what that was. Let’s start again, shall we?

D&AD’s fantastic new book is out now, in a second and updated edition. The layout of new edition is better than the first with many of the featured ads appearing as full spreads, as they originally appeared in the magazines. And alongside the work, the advice of 48 different writers on the craft of copywriting.

At the risk of a wagging finger from its publisher Taschen, I’ll end today by excerpting my short offering in the volume, an essay titled “In Praise of the Humble Print Ad.”

It is no longer as fashionable as it once was to be able to write a great print ad.  A print ad simply isn’t as cool as it once was.

A print ad is not interactive and it doesn’t link to other print ads. To create a print ad, you don’t have to go to LA or to Hyper Island. It usually ends its short life under a puppy and print ads are almost never featured on YouTube. Yet in its bare two dimensions the humble print ad contains all the challenges of the entire creative process.

In fact, when I am looking for talent to hire, I find the most telling pieces in their portfolios are the print ads.

There’s nowhere to hide in a print ad. The idea is right there on the surface or it isn’t. There’s no music to tell me how to feel, no loading bar to tell me the clever bit is about to happen.

You are reading a book that is still devoted (I presume) to print ads. If this edition is anything like the last, it is fairly bursting with good advice from great writers on their creative process. So I’ll limit my remarks today to just this: If you are a student or just starting out in this business, I encourage you to learn (before you learn anything else) how to write a great print ad.

It is the molecular building block of the advertising universe.