Reprint of my fave CHRISTMAS essay. 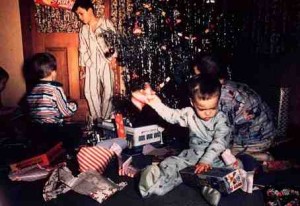 (Article I wrote for the Los Angeles Times.)

My mother, a dyed-in-the-wool Minnesota Democrat, is sitting across the breakfast table from me. She’s reading the paper and comes across an ad for the big after-Thanksgiving sale at The Mall of America.

“How can people even go to that place?” she laments. “It’s just a … just a monument to Capitalism!”

She’s my Mom, so what can I tell her? I wish I could say, “Ma, that dress you’re wearing? Did you, um, grow it or something? And those shoes, did you … whittle those? No, you bought ‘em, Mom, with money, in a store. That’s capitalism … and it’s okay.”

Exactly why do so many people get disdainful of the idea of stores and buying things and capitalism this time of year?

The Thanksgiving dishes are barely in the sink and before the first boozy uncle can tether his blimp to the sofa and unbutton his Spandex to make room, everyone’s all “Christmas has just become so commercialized.”

Shopping is suddenly bad. And why? We’ve been coming out of stores all year long, teetering under Grinch-size piles of merchandise that would buckle a sherpa’s knees. Eleven straight months of spend-spend-spend, but have a turkey drumstick, watch a football game, and boom – the nation’s on the shrink’s sofa again going “Geez, aren’t stores bad? It’s bad to buy things, isn’t it?”

Everybody seems to have forgotten the long July 4th weekend and that 3-day AmEx bender we all went on at Home Depot. And when it was over, I don’t remember any hair-shirt whining about “Who can celebrate national independence anymore, what with lines this long to buy a grill? Kinda makes a fella forget what the Declaration of Independence really stands for.”

But here we are again at that one time of year when our nation’s super-ego puts on its Self-Hatred Christmas Special, when the apologists line up to lament the excesses of one of the world’s strongest economies, and through it all we’ll hear one Scrooge after another puttin’ the spin on the Ghost of Christmas Past: “It wasn’t like this when I was a kid.”

Oh hush, it was exactly like this when we were kids. The presents were geekier, yes, and the lights on the tree were the big hot kind you could smell from upstairs. Other than that, it was exactly the same.

As a child of the ‘50s, I personally recall some serious merchandise worship happening under the tree. It may not have been an xBox I was opening, but don’t try to tell me I was on some higher spiritual plane as I ripped through the 1959 wrapping paper, my teeth gritted in full Merchandise Frenzy: “Shut up everybody! It’s a Daniel Boone raccoon hat and it’s mine!”

Let’s face it. Stuff is fun. And stores are where we get stuff. But the Puritanical gene, though recessive, still runs strong in America. A penny saved is a penny earned, but now it seems a penny spent is the top rung of the ladder straight down to hell.

But the fact is, ladies and gentlemen, ours is a species that runs on commerce. And whether your tribe happens to trade pelts or Euros, the rites of celebration have always involved a bit of excess consumption. At history’s very first ritual of celebration, I’ll bet Grandpa homo sapiens bought drinks for everyone in Olduvai Gorge, yelled “Kill the fatted calf,” and woke up a day later to a cave that was a complete mess.

Personally, I’ll be doing much of my shopping online this year. And, yes, one day when I’m old I’ll be slumped in front of my son’s computer, grousing about my own Christmases Past. “Well, back when I logged onto amazon.com, I tellya, downloads happened just like that! And click-throughs took you right to the Christmas specials. And those damn pop-up ads let a man shop in peace!! I remember back when e-tailing meant something!”