Shooting one idea through the lens of another.

In a screenwriting book I read years ago I stumbled on this basic Hollywood trick that seems to apply to what we do here in advertising. To create a story, the author said, “Create one world and then look at it through the eyes of another.”

Long before the term was popular, this author was talking about mash-ups. For instance, isn’t Bladerunner basically an old-fashioned gumshoe detective story seen from the future?  More recently we’ve had Cowboys and Aliens. I don’t mean to go all-sci-fi-geek on you, so how about Brokeback Mountain … which one could argue is sort of a Cowboys and Gay Guys. One world, seen through the eyes of another.

My point is this: thinking in terms of mash-ups may be a good mental exercise to add to your regular creative process; a doorknob you’ll want to rattle as you search up and down the hallways of your brain for ideas.

One of my very favorite mash-ups was a piece used to create talk for Mingle2, a dating site. It was called Zombie Harmony, a dating site for the undead. It’s worth a visit. 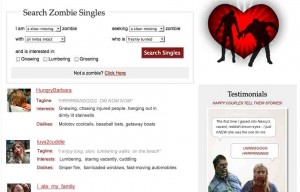 For an Aussie beer named Tooheys, they mixed the worlds of money and beer. In this world, doing a favor like helping a buddy move was worth a bottle of Tooheys, while helping him move in with your ex-girlfriend would cost him a case.

Another way to start the mash-up engine is with a meme. Take a popular cultural image or saying and shoot it through the world of your client’s brand. Kit-Kat candy bars started a nationwide buzz by taking the whole silly Shroud-of-Turin, Jesus-on-toast thing and mixing it with the world of candy. (Figure 6.4) Voila, you have Jesus on a Kit-Kat, a “story” that was planted in Facebook and eventually picked up by the news media (on what I can only hope was a very slow news day).

Memes are in great supply on YouTube, as are mash-ups. With a few edits, The Shining + comedy became a trailer for a happy family movie. You can also mash up media. Foursquare is Google Maps + social. And Google Maps + Twitter = Twittervision, a site displaying the location of tweets and tweeters in real time.  And TiVO + lots of marijuana = the Domino’s/TiVO ordering service that lets furniture vegetables order pizza without having to stop watching The Princess Bride for the 800th time.