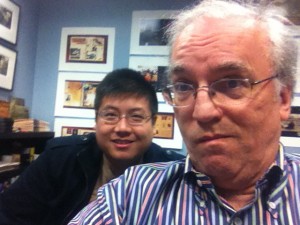 Double-selfie of me and my smart student, Igor Tanzil.

I had, for a number of reasons, left out Coca-Cola’s “Beautiful” Super Bowl spot by W+K out of my ad picks of the year. The first reason being that it didn’t quite move me like my other options did. It was a spot that is worthy of the Wieden + Kennedy name: a larger than life message for a larger than life brand that was executed to a tee. Nevertheless, it didn’t elicit enough emotion in me to warrant a spot in my favorites. Maybe its because I’m not an American, or maybe its because I’m not a huge fan of soda; whatever the case, I saw it, appreciated it for the beautiful sentiment that it presented and moved on.

Now, the second reason I left it out was the obvious can of worms it presented. The moment the lyrics of “America the Beautiful” was sung in another language, I smiled. It changed to another, and another, and the spot culminated in a number of languages I hardly recognized. As previously stated, it was a beautiful sentiment and I admired both W+K and Coke for it. I was however, almost immediately fearful for the backlash it might bring upon itself and chose to avoid touching the subject. Call it cowardice, call it indifference, whatever – I left it alone.

That is of course until the following couple days. I hold my Facebook friends and other social media contacts in high esteem in the fact that I didn’t have to see too many negative reactions to the ad in any sort of agreeable fashion, and for that, kudos my friends: this post is for you.

So a little background for the unaware: Two iconic American companies, Coca-Cola and W+K, presented the nation with a message of tolerance and grace that is a direct reflection of the global world we live in today. Of course, the internet and its denizens reacted as one might suspect and you can find evidence of this on Coca-Cola’s Facebook page, their YouTube spot, and this nice compilation by Matt Binder on his blog: Public Shaming.

In one fell swoop, the consolidated vermin and scum in a country that preached racial equality and world peace came out of the woodwork. Bigots rose as one and cast their Cokes in protest, armchair politicians and closeted Klan members took to their keyboards and bullhorns; and so revealed are a nation’s worst.

I am, admittedly, not a political person and am for the most part content with confining my political views and outrages to close friends and family. However, something like this deserves a little more attention. The unfortunate lifeforms that took to the web are a sad reminder to the many nay-sayers out there that bigotry and racism are alive and well. Lest we forget, hate breeds hate and the clear heads that preach tolerance and understanding are few and far between. In my humble opinion, when you actively hate a culture and people so much as to express your hate in public – please stifle your surprise when they reciprocate.

I grew up in three different countries, I was shaped by two cultures not of my own, and I am more fluent in a language that is not my mother tongue. Such is the nature of a modern, global society. And yet, even in a country that proclaimed world dominance with the right to maintain a role as peacekeeper, such hate persists.

Every remark that condemns this ad is a reminder to all that we are indeed different.

Every can of Coke thrown in anger is a call to others to hate.

We often forget just how easily a little discrimination can lead to full blown war. And to react to a soda ad with such vigorous spite? I’d wager some money that these people also believe that the world is flat and that the sun is in motion around their sad pathetic lives.

To Wieden + Kennedy and Coca-Cola, rock on. No matter how you cut it, the commercial conveyed a message that is apparently ahead of its time. To you and the rest of us who saw the ad and didn’t immediately turn into a degenerate: take solace. For every bigot out there attempting a Coke boycott, the rest of us will go on towards a future that is quickly leaving them behind.

To those who have the urge to express anger towards a multilingual take on a song, please take a moment to consider this:

Your actual nation anthem – called The Star-Spangled Banner, by the way – has not actually been defiled in any way.

Your vision of an all white nation under an enforced language is a similar aspiration held by a one Adolf Hitler in the early half of the twentieth century.

Also, given all the effort put forth by both the ad agency and Coca-Cola to make this commercial a reality, it is safe to assume that countless hours have gone into studying any possible backlash and response from the ad. You, and your inbred bigoted kin have been considered and deemed to be in the minority (or a fantastic emotional pressure point to exploit).

Finally, to those who insist that you aren’t a racist with the argument that the English language is a sacred unifying factor in the United States, well consider this: If your language is the last and sole unifying thread for the country, then the country itself has some issues.

Love of country, regardless of who you are, is an intangible feeling that goes beyond language. It is a feeling that is borne out of familiarity, appreciation of everything your country has given you, and most importantly, the people that make up your country. Countries aren’t divided by language, to that point, why aren’t you the United States of America, Australia, Canada, England, New Zealand, Singapore, South Africa?

A country is an ideal, a feeling, a place, a home.

I’ve watched in envy as people call America “home” regardless of where they are from and regardless of the language they are most comfortable speaking. This is the ideal that made so many of us foreigners flock here, and whether or not we will ever be accepted, we look to this ideal as a beacon of what could be. America, the beautiful, will remain beautiful regardless of what’s being spoken on the street. And my country, Indonesia, will still be mine even after we’ve incorporated the English language into our education. Because at the end of the day, home isn’t defined by a language, a language is but a means to understand.

It’s just a crying ass shame that so much misunderstanding has to fall in between.

NOTE: It’s a sad day when the Americans I’m proudest of are from other countries. You rock, Igor.