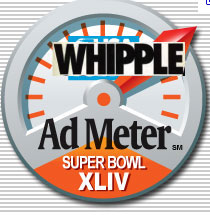 Every year we scratch our collective heads at the price broadcasters get for thirty seconds of Super Bowl. And while the figure this year is a gasp-worthy $3 mil, all this hand-wringing is the same as it ever was. Happens every year. I remember back in 1990 – when they were charging around $700,000 – and we were all, “WHAT? 700 LARGE?!?!? ARE YOU INSANE???” And still the brands line up, wallets in hand, and inventory is gone sometimes as early as November.

Okay, we get it. It’s the only mass-market play out there anymore.  Used to be that I Love Lucy got you 60% of America. Fast forward to today’s fragmented market and the 800 or so platforms you can get content, and it’s clear why some clients are hypnotized by the Bowl’s 45 rating. More compelling is the report that 44% of us will be watching the game just to see the commercials. (Lightspeed Research)

Well, from what I read, the investment can sometimes be worth it. University of Buffalo researchers discovered that USA Today’s Ad Meter winners boosted the companies’ stock prices the following Monday. In fact, UB researcher Kenneth Kim who co-authored the unpublished study said, “When you consider that the average market value of a company that airs an ad during the Super Bowl is about $30 billion, it increases their value by roughly $80 million in one day.” Okay, so maybe spots that land way up in the top ten of USA Today’s list aren’t a complete waste of money.

Which makes me think Monday morning must really suck for CMO’s whose $3 million bought them brand crypts somewhere between, I dunno, #28 to #99 on the list. (The guys who get the very bottom spot – #100? They can feasibly get away with it by claiming “Hey, that’s what we wanted to do, man. No, seriously.”)

If memory serves me, the bottom is usually full of brands that are all wrong for the venue or those that didn’t abide by the “rules” of advertising on the big game; rules which were spelled out rather delightfully in a Fed Ex spot on the 2005 Super Bowl. In 30 seconds, Fed Ex demonstrated all ten things a spot needed to score well: Celebrities, animals, dancing animals, cute kids, groin kicks, talking animals, attractive women, a famous pop song, a product message, and then a little comic pop at the end. If you look at what’s won in previous Ad Meters, they’re dead nuts on.

Say what you want about the validity of USA Today’s Ad Meter. Yes, their sample size fits in a phone booth but it’s here to stay so get over it. Even Mullen’s intriguing Brand Bowl (which I’ll be following) may not capture the true popular sentiment given how it’s powered by microblogging busybody ad-geek twits like me.

Here’s what I think people need to do. They need to just listen to their Uncle Whipple. He’s gonna nail it.

Here are my Top 10 predictions of what’s gonna win on Monday morning’s Ad Meter. I haven’t actually seen any of the spots, and my sample size is 1, either of which may affect results but I’ll stand by this list nonetheless. In fact, I’ll post the Monday after and own up to my list, good or bad.

Uncle Whipple’s prediction for Ad Meter’s Top 10 spots:
• Two of Anheuser-Busch’s 8 spots
• One Skittles or Snickers spot
• One of Career Builder’s monkeys
• One of eTrade’s babies
• One from Coca-Cola (betcha Weiden will do something cool)
• One of the 7 or so movies, probably Cowboys & Aliens

I am less sure what the last three in the top 10 will be but I’m gonna guess:
• A user-generated spot for Doritos
• Pepsi may do something fun for PepsiMax
• One of those annual national embarrassments from Go Daddy

(And for my lucky-strike extra? The Best Buy spot from Crispin. Then again Crispin may go too weird for this mass audience of Bud-drinking orange-fingered Cheetos-gobblers.)

Anyhoo, there you have it folks. See you on Monday, after the Packers win.