A short video of an ebook I hope to release in July.

“The Shining, but as a comedy.” That’s about the best way I have to describe Thirty Rooms to Hide In. It’s partly about how my father went from being one of the world’s best orthopedic surgeons at the Mayo Clinic, to lying dead on a motel room floor in Georgia, a broken ashtray under his head. But it’s also about how my five brothers and I had a wildly fun, thoroughly dysfunctional time growing up at the foot of our father’s volcano. Dark humor was the coin of our realm. With the Beatles as true north on our compass of Cool, we made movies, started a rock & roll band, and wise-cracked our way though a grim landscape of our father’s insanity, Eisenhower’s Cold War, fallout shelters, and JFK’s assassination.

For now, I’m busy learning about ebooks and epublishing and e-everything. I’ll be putting up a site soon called ThirtyRoomsToHideIn.com. I’m hoping to release the book on July 3rd — the 45th anniversary of my father’s death. (Scary music here – oooooooo-ooooooo.) 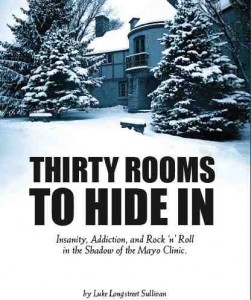