A paragraph or two on storytelling as it relates to branding. 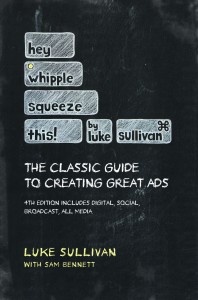 Another small excerpt from the upcoming 4th edition of “Hey Whipple, Squeeze This.” Sam and I are revising the whole book top to bottom to BAKE IN digital and social. Those aren’t things you can “add on” in a campaign, and we can’t just spot-weld on a new chapter either. We’re tryin’ to bake it in from the get-go. Anyway, this small section is about storytelling.

Rick Boyko, long-time creative and President of VCU’s Brandcenter explains the ad biz very simply: “We are storytellers in service of brands.”

Seven words, but they sum it up nicely. Our job is to get our brands’ stories into the national conversation and ultimately into the firmament of popular culture. “To make them famous” as they say at Crispin. The thing is, we don’t get people talking about our brands by feeding them product benefits straight out of the sales guy’s spec sheets. People talk in stories and so must we.

There’s a great book I recommend to ad students. It’s not about advertising but about screenwriting: Robert McKee’s Story: Substance, Structure, Style and the Principles of Screenwriting. McKee makes a convincing case that the human brain is wired to hunger for story— that a structure of three acts, taking us from problem to unexpected solution, is something our brains crave. Story just sucks us in. Even when we know how the story on some late-night TV movie is going to end, we stay up later than we ought to just to watch the dang thing, don’t we? Theorists suggest that story is actually a cognitive structure our brains use to encode information. So in addition to its drawing power, story has lasting power — it helps us remember things. (“Did you see that spot last night? The one where the . . .”)

Our job is to discover the stories behind our brands and tell them in a way that will get people’s attention. “Told well,” Bogusky and Winsor write, “they stick in our minds forever.”

What’s interesting is that even though the ascendancy of digital and online looks to be a permanent change, the classic construct of a story not only continues to work in the new medium, its narrative power is amplified. I’m reminded of a recent interview of Avatar director, James Cameron. Asked what permanent changes digital technology has made in filmmaking, Cameron replied, “Filmmaking is not going to ever fundamentally change. It’s about storytelling.”  Cameron’s comment also explains why some of the Star Wars prequels kinda sucked — it was special effects over storytelling.

Steven Jobs and Apple have been telling the same great story ever since they aired their famous “1984” Super Bowl spot; a story first told in a line of copy from one of their early print ads: “Instead of teaching people more about computers, we taught computers more about people.” Mac’s are designed around the way we work, not the way manufactures of PC’s work. Mac’s are the “computer for the rest of us.” Remember that huge image of 1984’s Minister of Truth in Ridley Scott’s dystopian Apple commercial? He’s still saying the same things today. (“We’ll make computers our way, maggots.”) He’s simply evolved into the tubby “PC Guy” in the Mac Vs. PC campaign.

The thing is, when a brand discovers its true story and sticks with it, others begin telling the story, too. At first, it’s only within the company and at sales meetings. Then at stores and in commercials. After awhile, if it’s an interesting story, if it’s a credible one, customers start telling the story and passing it on. And to be a credible story it’ll to come from the DNA of the brand. As we said in Chapter 3, it has to have the ring of authenticity.

The construct of a story serves us at this brand level, but we’ll also need structure to write a TV commercial or online video, a radio spot, or – as we’ll see – entire multi-media campaigns. TV remains my favorite medium for discussing the structure of story.

I think of television as a thirty-second play with three acts. The curtain goes up on an interesting scene where some conflict is already evident. Also evident at a glance is some back-story (hints about who these people are or how things got this way). Things get tense or weird or complicated, usually because of some challenge to the characters. Finally, it’s all resolved in an unexpected way and the characters are changed because of it.

Of course, there are many great movies, spots, and novels outside this Hollywood sort of story arc, but for our purposes this is classic story structure. There writers more qualified than I to teach story and most of them will begin with Aristotle’s original definition (“A whole is what has a beginning and middle and end”). Many recommend anything by Chekov but for those of you here in the middle-of-the-road with me, I say read any short story by Stephen King or Ray Bradbury.