Actual client comments turned into posters. Plus my worst-client story. 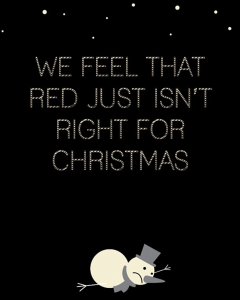 Check this site out. It's funny.

In your career you will hear many very stupid things. Your job, should you choose to accept it, is to keep a straight face and not laugh out loud. And this site just posted a nice series of some of the silliest client comments turned into posters. It’s very funny, very cool. My favorite client story is the “Mr. Froggy” story. It was a tale of such immense stupidity that you’ll just have to take my word for it that it really happened. I put it in my book Hey Whipple, Squeeze This. But here’s the excerpt:

Koncept Krushers can be bigger machines than just a client’s research department. The whole company may, in fact, be structured to blowtorch new ideas. This sounds cynical, I know, but I’ve seen it. I’ve stood right next to these furnaces myself and felt the licking of the flames.

The client in question was one of those Sisyphus accounts I described earlier. A big Fortune 500 company. Huge. The kind that asks for tons of stuff that’s always due the next morning and you find out later it’s for a product they’re thinking about introducing 10 years from now.

So, anyway, this poor art director is stuck on a Sisy Corp type of account. She doesn’t know this, so the day she gets a job for a big TV commercial, she’s excited, right?

Well, she and her partner begin working on it. After a vast amount of work, they have a couple cool ideas. I mean some really smart things that also happen to be potential award winners (or “podium wobblers,” as they’re called in Britain).

Cut to next scene, meeting number 1 with the client — all of their ideas are dead. The reason? Doesn’t matter. (You’ll see.)

So they get to work on another series of ideas to present in meeting number 2. Days later, there’s excitement in the creative department, rejuvenation. “We’ve done it again!”

Okay, here’s where we cut to that movie cliché — the clock hands spinning ’round and ’round, the calendar pages flying off the wall. The changes keep coming in. The client doesn’t like the idea. Or they cut the budget. Or they change the product, or they change the strategy. One time it’s the client himself who’s changed — fired, actually — and now there’s a new client who wants something totally different. Whatever it is, it’s always something.

During meeting number 4 through number 63, the campaign is watered down, softened, and diluted so much that the final commercial is precisely as interesting as a bag of hair. The last interesting thing in the commercial is successfully removed in meeting number 63. An optimist might say that things should have gone smoothly from here on out. (“For cryin’ out loud. It’s a bag of hair! What’s left to complain about?”) But there are no optimists in advertising.

Meeting number 64 isn’t even a very important meeting, given that the CEO signed off back around meeting number 50 or so. But there needed to be a few dozen more “For Your Information” sort of presentations, and if any of them went badly the agency would have to start over.

The meeting begins. The art director goes through the old moves, trying to remember the fun of presenting it the first time. But there’s no spark left. She just . . . presents it.

The client sits there. Says nothing at first.

The client then reaches down into her purse and pulls out a small Kermit the Frog doll. (This really happened.) It’s one of those flexible dolls, and she begins bending the frog’s arms around so that its hands are covering its ears. Then the client says: “Mr. Froggy doesn’t like some of the things he’s hearing.”

The client actually said, “Mr. Froggy doesn’t like some of the things he’s hearing.”

Let me put it this way. There are two kinds of hell. There’s “Original” and then there’s “Extra Crispy.” This was Extra Crispy.

Well, Ms. Froggy-Lady, as she came to be known, wasn’t able to kill the commercial, only make it a little worse—a feat in itself. And so, finally, in meeting number 68, the whole company had signed off on this one storyboard.

All in all, it took 68 presentations to hundreds of MBAs in dozens of sweaty presentation rooms. In fact, there were some sarcastic agency memos to the media department suggesting that since the commercial had been shown to thousands of people already, there may not be a need to air it at all.

The creative team went back to the agency, opened two beers, and sat looking at the sunset through the windows of their offices on the 30th floor. There, over the body of the original storyboard that lay on the floor, they performed an advertising postmortem, discussing the more shocking moments of its horrifying death.

Eavesdropping, a casual listener might have thought the two had just come out of the theater and were talking about a horror movie. (“Yeah! And remember when that one guy came in and ripped all its guts out? Man, I did not see that coming at all.”)

That’s when they noticed something out their window — something disturbing.

Outside their window was a 40-story building.

The thing is, the 40-story building wasn’t there the day they began working on the commercial.

With horror, the creative team realized that a building had been raised, built from a 30-foot-deep hole in the ground and 40 stories into the sky, faster than their little 12-frame storyboard had been destroyed and approved.

Why do I tell you this? To chase you away from the business?

No, to steel you for it.

This stuff happens all the time. And keep in mind, none of these clients were stupid people. (Well, we can discuss Froggy-Lady later.) They were all pretty sharp businesspeople, trying as hard as they could to solve a problem for their brand. But as smart and nice as they all were individually, a calcified approval process had crept into the company’s structure, and it became completely impossible to get a decent idea out the door.

This happens all the time. Be ready.