Ad agencies aren’t the only creative game in town anymore.

This week at the Savannah College of Art & Design we held our annual Career Fair.

As a professor, I had the privilege of watching our smart kids fine tune their books, fret over their resumes, and gossip in the hallways about which agencies they were going to rush. I watched as several thousand creative kids stayed awake pretty much all week, and then threw on their Sunday best to lurch across the bridge towards the convention center and the futures that lay there. 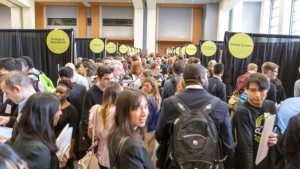 In the hangar-like building, recruiters from 151 blue-chip corporations awaited the students’ arrival, in booths set up to attract the next generation of copywriters, art directors, animators, designers and coders. Hundreds of tables were spread out like a Turkish bazaar of free pencils, thumb drives, and branded schwag, defended by only a thin line of recruiters who, when the doors burst open at 10am, were quickly overrun by the unemployed hordes.

There they were: 151 real companies, from Nickelodeon to Amazon to Abercrombie & Fitch, all bearing tickets to real jobs that paid real money. (I thought about inquiring if “Fitch” was in attendance, but the line was too long.)

The thing is, fairs like this – and schools like SCAD – simply didn’t exist when I went to college. Me? I graduated with a nearly useless liberal arts degree. Well, I suppose it is possible I would’ve been snapped up, had there been any companies looking for skinny chain-smokers to write term papers on 17th-century Russian poetry. But these kids? They came armed with real skills. With the ability not only to think creatively, but to make stuff; to actually do stuff.

Companies still want people with ideas, yes, but the days of “I’m just an Idea Guy” (two finger guns pointing) are gone. Making your idea get up and walk around the room, that’s the ticket. And it’s a ticket that’s getting kids into more and more places these days, and not just the usual line-up of ad agencies.

“We’re no longer competing just with other advertising agencies,” says Bob Jeffrey, of J. Walter Thompson. “Now there’s also Facebook, Google, Vice, Maker Studios and a whole bunch of other content players we compete with.” Amy Hoover, president of recruitment company Talent Zoo, says almost half the creative jobs out there today are not at agencies. They’re at big Silicon Valley powerhouses and cool little start-ups. They’re also at in-house agencies at the big-box companies; your Home Depots, your Targets, your Staples. Their money’s just as green as any agency’s and people have long, happy, wonderful careers in the in-house industry.

I know it for a fact. Recently I gave a day-long seminar at Lowe’s in-house agency up in Mooresville, North Carolina. My host was ECD, Brad Stephens, who left an agency career (Mullen, most recently) to oversee a huge team of creatives in a little town on the shore of Lake Norman. Yeah, the town’s small, but Brad’s job description on his LinkedIn isn’t.

A huge brand in a small town. In fact, I could hear birdsong at lunch in the company’s outdoor cafeteria.

Adam’s Outdoor Advertising is another good example of great places to work outside the usual list of agencies. Todd Turner, their corporate CD, in from Charleston, South Carolina, was recruiting for several open positions. “Our teams are small, so my hires have to do it all – production, writing, design, art direction. And not a day goes by there isn’t at least one meaty conceptual project to work on.”

Manning the booth with Todd was Jon Riley, a SCAD ad graduate who showed me some recent work from Adams. One was this OBIE award winner for a divorce attorney. Nice.