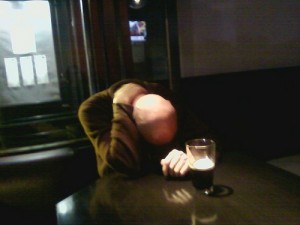 Hey everybody. Particularly you ad students who were in the national ad competition last week:

Professor Novak sent me an email last week giving me the results of the competition you all went to last week. Like him, I was truly bummed. Certainly not as bummed as you guys, but bummed just the same.

Empathy is probably way-more-called-for here than any lesson, but this is a school and I am a teacher, so… sue me, but I see a learning opportunity.

Believe it or not, I was once a young ad geek too, and back then winning in the shows was the most important thing to me. Nothing else mattered. This attitude served me well….but only on those days when I won a lot of awards. The days I didn’t do well in the shows, I got so depressed. It was kinda pathetic.

Fortunately, I managed to grow out of that phase and develop a healthy respect for my talents regardless of how I did in the shows. A big part of what helped me get to that place was what happened the first time I was invited to be a judge in the show of shows – The One Show.

There I was in Barbados (yeah, not too shabby) with all these big-shot ad stars, creatives I’d been studying for years. These were some really great ad people, okay? As the show was judged over the course of about five days – and to my dawning horror – I saw things die that just….well, shouldn’t have died. Great stuff, dying left and right. I was amazed at the capriciousness of the judges. One day they’d love a piece of work and move it forward in the competition. The next day, “What’s this crap still doing in the show?”

I came back to my job with a renewed vigor and, more importantly, a perspective I didn’t have before.

The shows – both the good and bad, local and international – the shows are all ruled by the Gods. Ultimately, you cannot control what gets in, even if you write the best single ad ever written in the space-time continuum. Sure, excellent work has better odds, but at the end of the day, it’s a roll of the dice.

So, to you guys on the team that competed last week, I say hats off to you. Yeah, goddammit, we didn’t win. It sucks. Fine, feel rotten for a day, but don’t let it keep you from getting in the ring next year. Same thing goes for those great times when you win – feel great for a day, and then get ready for the next one.

If only I’d listened to my old boss, the late Mike Hughes, when I was at The Martin Agency. All those times I came dragging into work depressed that I’d been shut out at some award show, Mike would say, “Luke (you whiny self-obsessed dingbat ….[okay, I added that part]), let your joy come from the journey, not the destination. Let your joy come from the working, not the results of your work.”

–See you in the hallways, Prof Luke