Advertising After The Zombie Apocalypse. 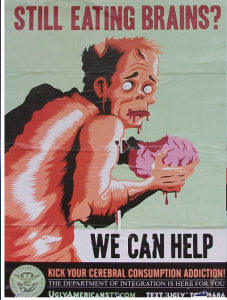 As expected, U.S. entries to Cannes were way down this year given the recent Zombie Apocalypse.

Observers are surprised ad people continue to even exist given their worthlessness in a economy that now values productive trades like farmers, electricians, and mechanics. In fact, the few agencies still operating attribute their success almost entirely to being above the second floor.

“You’re not going to see as many TV entries from DDB this year,” remarked CD Jay Russell, speaking from the balcony over Whacker Drive. “The entire production work force of L.A. is infected and…” Russell’s interview was cut short as a horde of undead photographers’ representatives stormed the locked doors below, their withered purplish arms extended, still clutching portfolios and complimentary bagels.

Without television, U.S. agencies’ hopes at Cannes rest on a few out-of-home entries, including McCann’s boring “God help us” messages painted on sheets and hung from their Manhattan office windows. “There are a few decent headlines,” observed Creativity’s Theresa Nelson. “But most are the usual crap like, ‘Need water,’ ‘Need food.’ At least that one team was trying with the ‘John 3:18’ thing.”

A few agencies are breaking out with messaging designed to change the eating behaviors of the zombie hordes. But J. Walter’s “Eat Smart” backfired as zombies simply ate bigger brains. Tribal’s “Dot.Zom” experiment on Facebook failed because zombies can already  “like you” simply by eating your brains. And DDB’s campaign for a heart-healthy diet (“More Gra-a-a-a-a-a-ins, Less Bra-a-a-a-a-ains”) died after focus-group zombies crashed through the one-way mirrors and cracked the researchers’ skulls like rotten Georgia peanuts and ate their pulsing brains forthwith.

Agencies are now trying simply to survive. To divert the zombie hordes away from their agency on 17, creatives at DDB have hung posters in the stairwells positioning the JWT survivors on the 5th floor as “the other white meat.”