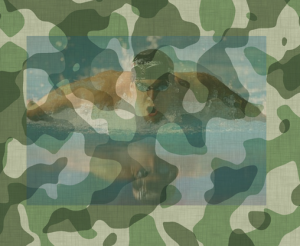 Over the course of my 33 years in advertising, I must’ve been handed a hundred “program ads” to write – you know, the kind of ad a company runs in an event program to express support for, say, the dizzying Everest of achievement of the local curling squad.

As a junior writer on such assignments, the first thing I did (after rolling my eyes) was look for some flimsy connection between my client’s product and whatever sport they were currently wasting money on.

As my abilities improved, I managed to create ads that – though a bit more conceptual – were still basically a soccer mom posing as an ad.  (Who cares that Twin Cities Federal supports the Vikings?? Seriously? Does anybody care?)

Think it through, people. If you go to the trouble to make an Olympic spot with a swimmer swimming or a gymnast gymming, congrats, you’ve created background wallpaper made out of stock images printed in invisible ink on Saran Wrap; flimsy, without substance, boring, completely non-existent, and a waste of money.

(“Honey! Get in here!! There’s a commercial that’s got Michael Phelps swimming in slow motion, determination in his eyes, and who knows where this commercial is goin’? Will it be about excellence? Teamwork? Man, it could be ANYTHING!!)

Nowadays I am of the opinion that saddling a commercial with some sports theme – particularly one every other sponsor is using – is essentially shrouding your client in full camo and face paint; breaking the oldest rule in the book, the zig-when-they-zag one.

But, hey, wait a minute.

Perhaps there is some kind of competition going on? One I don’t know about – a competition where companies compete to see if their covert Navy-Seal-of-a-commercial can make it into and then out of America’s living rooms without anyone noticing a thing. If so, damn!, you got me guys! These spots are in-fuckin’-visible.

Wow. Okay, now that I’m onto your game, I have another idea. For the next Winter Olympics, all the on-screen actors oughta wear those white gilli suits, you know, the kind those cool sniper guys wear? The dudes would be Totes Inviz.

Just make sure you cover up the brand name on the gilli suits or you could accidentally end up selling something.

NOTE: Just got a reply from a reader named Deven Nongbri who said, “Hey, I disagree. I loved those P&G ‘Mom’ commercials, with the moms watching the memories of their little kids in those Olympic settings.” Deven is dead right. One point for Dev. Still, can I argue that the Mom spot is the exception that proves the rule? Or maybe, like I’ve often said, rules are made to be broken. In any case, one for the Devster.