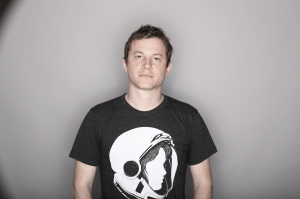 This is Ryan. His partner, Scott Brewer, is much better looking.

I met Ryan Carroll when I worked at GSD&M in Austin. He was a young writer then, and now he’s a big shot, group creative director and won’t take my calls. It was his team that came up with last year’s Radio Shack spot on the Super Bowl: “The ’80s Called.”  You can read a bit more about that spot and about his partnership with Scott Brewer on FWA. On a recent phone call he told me he was frustrated, looking through too many junior books to find a good creative hire. I said, dude, write a guest post for me, and he did.

Most student books look/feel/sound alike and most CD’s I’ve talked with agree. This shouldn’t be too surprising. There are really five or six solid portfolio schools out there. Schools teach a method and students apply that method and so perhaps it’s no surprise most books look similar. The gene pool is pretty shallow.

So as you build your book and your site, it’s more important than ever to find your own voice and style. Just like you do for the brands you work on, you need to make your own brand stand out; to take those lessons you’re being taught and make them your own.

Here are some things I look for when reviewing a book:

1.) I want more than just ads. I want to see you solve business problems. Identify a problem for a brand and then show me how your idea can make the client money. How your idea will attract more customers or make people look at the brand in a completely different way.

Here are two great examples from a student book. His name is Maxx Delaney and we just hired him.

As you can see in the video, for Citibank, he (and his partners) invented a product that would attract an entirely new group of investors. And in the Netflix video, his idea gives millions of users an entirely new reason to use the product. These are the types of problems modern creatives need to be able to solve. This is much more than advertising. It’s about business.

[HeyWhipple’s note: I love Maxx’s About Me paragraph: “Maxx Delaney likes to think about stuff and then write about those thoughts that he thought while he was thinking about things.”]

2.) More than integrated campaigns, I want to see you execute an idea brilliantly with a given technology.

Too often, I see this – an integrated campaign that shows me how your pantyhose idea can work for TV, works on Facebook, works in a bus shelter and then – drum roll – an iPhone app. (Because we all know people can’t wait to download another brand’s app.) The problem is that the extension ideas are rarely as strong as the initial idea.

When I see this, I believe the student is trying to convince me it’s a big idea because, look, it’s in all these places. Instead, just pick a technology (mobile) or platform (Instagram) and show me a brilliant idea that makes the most out of that technology or platform. Make me look at using Instagram in a way no one’s thought of and I will love you forever. Or at least hire you.

[Ryan had lots of other cool stuff to say and we’ll be posting that in a week.]