An Old Video I Made About Being A Creative Dickweed. 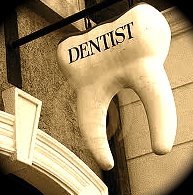 Why do people in this business get such big heads? I can’t for the life of me figure it out.

When you think about it, in the old days we woulda just been the knuckleheads who carved the big tooth signs for the town dentist.

“You liked that? The whole sign as a tooth? Fuckin’ brill, right?”

Yet to this day some of us seem to behave as if we’re Hemingway, Michelangelo, and Mother Teresa all poured into a Bottega Veneta suit and posing for photos holding a baby we just saved from a burning building.

But back in reality, where we get our mail, all we’re doin’ in this business is makin’ stuff like end-aisle displays. Okay, sometimes we get to hang our big tooth on the Super Bowl, but it’s still a tooth.

Yes, I know there is honor in every kind of job, including ours. I’m not trashin’ what I do for a living, just the people who make way more of what we do than they oughta.

So anyway, back in 1985 (yes, there were agencies back then) I made a stupid video for some ad club meeting. I thought, what if I could live for just a day as the most arrogant dickweed in advertising. My silly idea was “Ad Guy 007.”

It kinda sucks, but it sucks less than the long version I just cut it down from. Ad folks from my time might recognize Daniel Russ (I beat him up), Charlotte Moore (007’s Moneypenny), Jerry Torchia (as the Wrist) as well as John Boatwright and Andy Ellis (account guy and client respectively). Check out my groovy “cell” phone, too.

And now, bidding you adieu in the famous James Bond fashion, is your author. . . .