How I Learned Not To Suck. (As Much.) 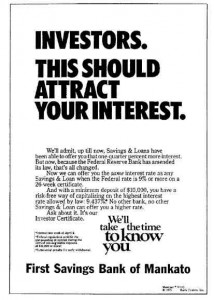 (I just “liked” my own essay to see what would happen. What happened was my name ends up in the list of likers. Made me feel creepy. Please forgive, won’t you?)

A friend of mine is writing a book about advertising and he asked me to contribute some thoughts about my earliest experience with the craft, in particular any memories about my “first time,” my first successes (or failures).

As many of you know, I am a huge fan of Ray Bradbury. I think he’s one of the best writers in captivity. In a biography about the man, Mr. Bradbury  remembered the time he first realized he’d written a good short story (The Lake).  Of that 1944 story he wrote: “When I finished [writing it], I was crying. I knew at long last, after ten years of trying, I had written something good.”

I think as we grow up as artists and creative people, our reach exceeds our grasp for years and years. We grow up being able to see so much more than we can do. We love the creativity we see in the art we love, but it takes years for us to learn a craft well enough to finally make something as good as the things we’ve been admiring.

So it was with me.

When I first got into the business, my mentors were the Original Minneapolis Duo, Ron Anderson and Tom McElligott. For the first few weeks after they hired me, Ron and Tom put me in a room with their collection of One Show award annuals. They called these books the “graduate school of advertising” and told me to sit down and read them all.

I was such an ad geek that I did more than read them. I Xeroxed every single page of every annual and then cut them all into individual pieces, all the ads, and then assembled all the world’s best auto ads in one book, all the best tourism ads in another book, creating a shelf-full of 3-ring binders of the world’s best ads broken into categories. Then, whenever I got a job order, whether it was for a restaurant or a brand of liquor, I’d go back to those books and re-read everything in that particular category all over again.

I would give the same advice to students today.

Learning the language of persuasion, of excellent copywriting, it isn’t a whole lot different than learning French. It’s about immersion. I immersed myself in the craft and you should too. Eventually all that smart starts to rub off on you.

So I started by copying. I didn’t copy concepts of course, but I did my best to copy the rhythms of, say, Neil Drossman’s brainy headlines or Ed McCabe’s smart-ass writing style. After awhile (in my case it took about 3 years) your own style begins to emerge.  You don’t decide what your style is, you discover it. Style is hard-wired into your brain and it’s a matter of discovering what your style is and then sharpening it, exploring its dimensions.

I’d like to say that once I studied all these masters, my own style quickly emerged and I was brill from then on.

Oh, but becoming good at anything is rarely a graceful process. In those first  years, I created some truly horrible things. I’ve already written about my first ad in my book Hey Whipple, Squeeze This: A Guide to Creating Great Advertising, and if I may, I’ll pull this short quotation:

As hard as I studied those awards annuals, most of the work I did early on wasn’t very good. In fact, it stunk. If the truth be known, those early ads of mine were so bad I have to reach for my volume of Edgar Allan Poe to describe them with any accuracy:  “. . . a nearly liquid mass of loathsome, detestable putridity.”

But don’t take my word for it. Here’s my very first ad. Just look at it (for as long as you’re able): a dull little idea that doesn’t so much revolve around an overused play on the word interest, as it limps.

Rumor has it they’re still using this ad at poison control centers to induce vomiting. (“Come on now, Jimmy. We know you ate all of your sister’s antidepressant pills and that’s why you have to look at Luke’s bank ad.”)

As I said, it ain’t pretty and it ain’t graceful. I sucked for quite a while and this in spite of having some of the best teachers in the world.

Hall of Famer Tom McElligott once looked at a radio script I presented him, handed it back to me shaking his head and said, “This is a real mess.” It was a mess. Oh, it probably had some shred of concept to it but it was undisciplined, not single-minded, it sprawled, it had useless little asides I thought were so clever, and on top of all that, it had the most junior of mistakes — it didn’t time out to a sixty.

I had another excellent teacher, copywriter Dick Thomas. I remember bringing Mr. Thomas another over-long radio spot. He could tell at a glance it was too long and said, “Here, let me just trim it a bit.” That’s when he fed my script into an oscillating fan he had running on his desk. “There,” he said, handing back my shredded, truncated script. “Rewrite it to that length.”

May I take a moment here to humbly thank all those brilliant teachers I had early in my career.

And now, in parting, I’ll summarize: Study the masters. Immerse yourself in their work over and over again until you have it memorized. Surround yourself with people who are better than you are. Don’t waste time defending your early efforts. Just shut up and listen to your teachers. Stay humble. Stay hungry.

Sooner or later you’ll produce something that looks like the work you’ve been studying and admiring. Like Ray Bradbury, one day you’ll lean back and realize, wow, all that work, it’s starting to pay off.