How To Last in a Tough Business Filled with Rejection. 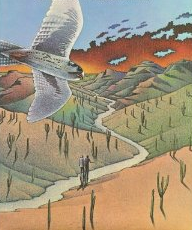 Distilled from a recent interview on blog radio with the delightful Heidi Ehlers, founder of Camp Black Bag – “The Boot Camp for Your Career.”

I was in the advertising business for 32 years. To yield that figure in dog years (an appropriate metric for this business), we multiply by by 7. Performing the calculation, I am not surprised to see I was in the business for 244 years.

What makes dog years such an accurate chronometer for life in advertising is the wear-and-tear the business takes on you. Particularly your spirit. Because 100% of everything you create in this business will be second-guessed and 95% of it will die.

Not just die, but killed; murdered actually, usually bludgeoned over its head by a client wielding a chart of some kind. What’s worse is that you’ll be asked to re-solve the same problem you just solved. For 244 years I listened to people asking me, “Can you do it over?”

Often I think we should go into some profession which requires only math. At least when you’re done solving a problem in math, no one comes in and says, “I see you have 2 + 2 equaling 4 … but I’m not crazy about the number 4. Can we have it equal something else?”

It’s a rough business on the sometimes tender creative spirit. So, what are we to do?

Many years ago, I heard this piece of advice: “The first duty of the artist is to survive.” Took me a long time to see how smart that advice was.

The world is not kind to creative people, nor their creative ideas. The world in fact conspires to reject new ideas. Good ideas are usually surrounded at birth by anti-bodies that do not recognize their strange DNA and want them dead.

Given this harsh environment, it is not surprising how often we hear about creative people burning out. And I’m not talking about the piles of dead rocks stars in hotel rooms, the writers eating shotguns, the artists slicing off ears. That’s mental illness and addiction. I’m talking about regular people like you and me who just grow sick of defending their work and finally leave, usually with a parting remark like, “It’s just not as fun as it used to be.”

It seems for creative people to survive, some sort of Kevlar must be laid over the spirit.

What you do to figure out how to care for your spirit, to keep it strong and flexible, that will be up to you. All I can tell you is what helped me.

Cultivate the ability of infinite resignation. Resignation doesn’t mean resigning. It means accepting. It’s about finding a way to be in the fight, but not of the fight. It’s a hard thing to describe and the best description I ever saw was in a book I read in college.

( Looks like I’m gonna get “all deep” on everyone again, so let me just don my clip-on pony tail here and let’s do this. Oh…. and bragging points to anyone who recognizes the book.)

“A man of knowledge knows that his life will be over altogether too soon. He knows that he, as well as everybody else, is not going anywhere; he knows that nothing is more important than anything else. … Under these circumstances his only tie to his fellow men is his controlled folly. Thus a man of knowledge endeavors and sweats and puffs and, if one looks at him, he is just like any ordinary man, except that the folly of his life is under control. Nothing being more important than anything else, a man of knowledge chooses any act and acts it out as if it matters to him. His controlled folly makes him say that what he does matters and makes him act as if it did, and yet he knows that it doesn’t. So when he fulfills his acts, he retreats in peace and whether his acts were good or bad, or worked or didn’t, it is in no way part of his concern.”