I believe there’s something more powerful than creativity. (I’m serious.)

More and more these days I’ve begun to think creativity isn’t the most important thing in an ad campaign. Heresy, I know, but I’m thinkin’  there is another way – possibly a better one – for a brand to stand out.

See, the thing is we’re a nation of eye-rollers. We’re cynics. Nothing is authentic anymore. We put finger-quotes around everything.

This national eye-rolling and “yeah whatever” didn’t happen overnight. Our sense of ironic remove is the result of a steady drip of lies from every authority figure we’ve ever set on every pedestal throughout history.

The heavens began to fall (in this writer’s opinion) when President Dick Nixon was exposed as the paranoid felon he was. That was in 1974 and ever since we’ve watched pedestals fall like dominoes as icon after icon was exposed as a liar, a cheat, a criminal, a pederast. Murderous policemen, horny congressmen (remember “wide stance”?), and priests PRIESTS, don’t even get me started. The Wall Street dirtbags, the Enron asshats … the nightly news is an endless perp walk of fallen heroes laid so comically low even our best satirists cannot summon the necessary irony.  Well, Fran Lebowitz came close when she wrote, “No matter how cynical I get, it’s impossible to keep up.”

Even as I write these words, on the news I am watching yet another Florida judge tell yet another pudgy white cretin after killing yet another black man, “Dude, we can’t stay mad at youuuu.”

And so we are a nation of skeptics, cynics and eye-rollers. It isn’t just that our bullshit detectors are set on high; it’s our truth detectors; those we turned off a long time ago. There isn’t any.

Okay, so here’s my question. Given all this, how can any brand manager continue to think people are going to believe his commercials? People don’t believe the news anymore. Considering all this, is more creativity really the answer?

Well, obviously, creativity’s important, but I’ve come to believe that right now the fastest way to stand out in this blizzard of bullshit is to tell the truth.

In The Art of Immersion, author Frank Rose wrote, “People today are experiencing an authenticity crisis, and with good reason. Value is a function of scarcity. And in a time of scripted ‘reality’ TV and Photoshop everywhere, authenticity is a scarce commodity.”

If I were a brand manager today, I’d at least have a go at accurately describing my product with candor and honesty, without superlatives, and maybe throw in a dollop of self-deprecation. And I’d publicly admit, “Yes, we have an agenda. We want you to buy our stuff.” 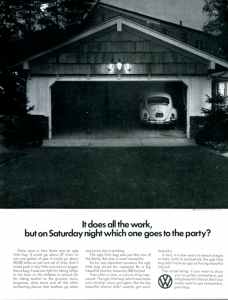 Crispin wanted you to buy Domino’s pizza and they brought the brand back to life with honesty (“We heard our pizza isn’t so great.”) and transparency (“Here’s what we’re doing to improve it.”) It isn’t rocket science, as Bogusky himself explained: “This generation knows you’re trying to sell them something. And you know they know. So let’s just drop the pretense and make the whole experience as much fun as possible.”

I’m reminded of one of my favorite ads, the ’60s VW ad shown here. While Detroit was selling “sizzle” and chrome and bullshit, VW shrugged its shoulders and went, “We don’t mind. Have fun at the party.”

You’d say, “Hey, check this cool thing out. It works pretty well. I bought one. Maybe you’d like it too.”