Mike Lescarbeau was not paid to write this review of THIRTY ROOMS. 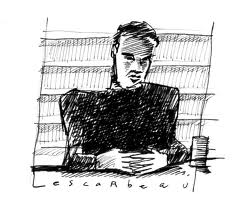 Art director Tom Lichtenheld drew this picture of Lescarbeau at a Fallon creative retreat in the '90s.

The New York Times continues its strange silence on the subject of my new book, Thirty Rooms To Hide In: Insanity, Addiction, and Rock ‘n’ Roll in the Shadow of the Mayo Clinic. But guess, what? My old Fallon friend, Mike Lescarbeau (who is now the effen CEO of Carmichael/Lynch), Mike was an early reader.

And people? He came out of the water over the book. He totally and completely loved it. In fact, he wrote two reviews of the book, the first one being my favorite. It was this email, sent five minutes after he finished the book.

Now that is a review, my friends.

Later on he sent me this longer version.

Luke Sullivan has crafted what may be the definitive work within the now well-trod genre of alcoholic memoir. An 18-year labor of love, Thirty Rooms to Hide In announces from the start it won’t be your average Dr. Phil production as a young Sullivan and his brothers giggle their way through their brilliant, 45-year-old father’s funeral.

Yes, Dr. Charles Roger Sullivan was a world-renowned Mayo Clinic surgeon who drank himself to death and left a wife and six sons to live on (for a time) in the Midwestern manse whose rooms provide the book’s title – and the setting for many of its most harrowing scenes.

But this is so much more than a collection of stories about a scary drunk dad. And for that we can thank author Sullivan’s failure to find what TV psychologists like to call “closure.”

Coming up short as he looks for meaning in the abusive acts of a sick parent, Sullivan instead succeeds by embracing emotional ambiguity. He returns again and again to the theme of coexisting emotional opposites, bringing us into intimate contact with the Sullivan boys and their good mother as they learn to keep simultaneous company with pairings like joy and despair, horror and relief, and, ultimately, love and hate.

The marrying of so many conflicting feelings could make for another tedious volume of navel gazing, but in Sullivan’s hands, the material is transcendent. In its willingness to sidestep easy answers and pat conclusions, his book delivers a refreshing honesty that somehow makes the creepy parts creepier, and the funny ones outright hysterical.

The read-it-to-someone-aloud passages are too numerous to mention. Suffice it to say the sense of humor developed by Sullivan and his brothers – at least for readers’ purposes – almost serves to exonerate the twisted behavior that made it a necessity.

Never prescriptive or preachy, this gothic tale nonetheless imparts a firsthand guide to surviving cruelty at the hands of someone who’s meant to love you:

When it gets bad, hide.

When you can’t hide, run.

When you can’t run, well, you better be ready to laugh.

Thanks Mike for your support, your friendship, and for letting me reprint this review. For which you received $0.00.