I love advertising competitions because they feature work I might not’ve seen but for the shows. The new Communication Arts Interactive Annual 21 just came out and I have done my readers the courtesy of picking out the top five projects featured in the magazine. There is no charge for this service.

This first one reminds me of that great saying they use at RG/A; “Make sure what you’re working on is either beautiful, useful, or entertaining.”

Well, this first one is beautiful and — if you were thinking of travelling to Maine — also useful. “The Maine Thing Quarterly” site is beautifully art directed and flows along so sweetly I suddenly find myself 20 clicks into it and going deeper. Still, it doesn’t beat my all-time favorite piece for Maine tourism, a bumper sticker that read: “Ah-yuh. Been To Maine.”

Google Labs had several things in the show. This first one is called “DevArt” and it’s a collection of cool artsy stuff people have made with code. For example, in the “Giant Map” idea, kids can stop through Gotham like they’re Godzilla. Here you can see cool stuff made out of different APIs like flickr, Instagram, tumblr, Twitter, Google Maps. As I tell my students, “Don’t make stuff for the internet. Make stuff out of the internet.”

A similar Google project called “Made With Code” was also featured in CA’s Interactive Annual; similar, but different. Made With Code is all about reaching out to girls to show ‘em how learning to code can help them build the next world and then rule it. Also, it doesn’t hurt that grads who can code start their careers at around $60k; that’s almost $15k more than most grads pull in their first year out there. 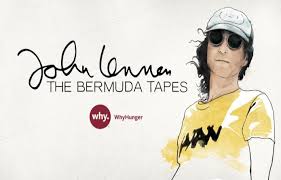 Also featured in this year’s annual was an app called the John Lennon Bermuda Tapes. It’s available on iTunes and if you’re a Beatles fan, dude, go get it. It’s an interactive app that tells the story of Lennon’s life-changing journey sailing through a mid-Atlantic storm in June 1980. The “interactivity,” while fun, is mostly silly stuff and isn’t technically interesting, but that’s okay — you can hear demos he made for Double Fantasy. Way cool.

Meanwhile, Coca-Cola has quietly turned into one of the best clients out there and their latest collaboration with Droga5 is also featured in the annual — the Coke Zero Sweater Generator. Me, I’m still partial to what they did for Coke Zero on Mother’s Day.

Those are my favorite top things from the new CA Interactive Annual. Again, there is no charge for this service. You’re welcome.