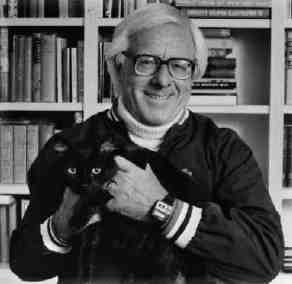 My favorite pic of Mr. Bradbury.

Posting this only a day after his passing, I still find myself way at the back of the line of people extolling their love of the man online.

In her 140-character tweet-eulogy, Nina Garcia quoted the great writer. “Libraries raised me. I couldn’t go to college, so I went to the library three days a week for 10 years.”

Another posted, “I’ll never forget what Ray Bradbury told me after I won a small award: ‘Good for you! Now, goddamnit, go out there and write!’”

And finally – my favorite tribute ­– from comedian and sci-fi geek Patton Oswalt: “Pour out some dandelion wine for Ray Bradbury. Goodbye, Mr. Bradbury. See you in October Country.”

From these posts, it’s clear people loved Ray; not just his books, but the man. He was described by those who didn’t read him as a science fiction writer, but he was just a writer. And his stories, though set in the shadow of dinosaurs or on the plains of Mars, his stories were about humanity.

He wasn’t a perfect man, as his biographer showed me, but he was a good man and he was a writer to the core. He wrote Farenheit 451 in the basement of a college library, stuffing dimes into the rent-a-typewriter machines he found there.

In his book On Writing: A Memoir of the Craft, Stephen King (a huge Bradbury fan) instructs those who want to be writers to do two things: read a lot and write a lot. I try to do both, this humble blog being part of it. And it was in my reading that I discovered Mr. Bradbury’s marvelous books.

Fact is, my most-prized possession is my complete collection of signed first editions of Bradbury’s oeuvre. The books consume me ­– from the 1950s sci-fi cover art to the smell of the 50-year-old pages to the stories those pages tell. My wife often jokes that if our house ever burns down, the camera will cut to the scene of me standing outside the house, holding my Bradbury books safely in my arms, and yelling up to her, “If you push off when you jump, you can probably make it to the bushes.”

After admiring this man’s work for years, I finally said to myself, “He’s gettin’ kinda old. You better tell this man how much his art has meant to you; soon.” So I sat down at the kitchen table to write a letter, by hand. I can remember feeling hesitant to put even a sentence of writing in front of the man, but Mr. Bradbury always said write with feeling and be authentic. So I wrote a paragraph or two saying “Thank you, sir” as best as I was able. I always hoped to hear back from him, but I never did.

That’s okay. He heard from me.

The man wrote about time machines. But it was always his books that were the time machines, taking me both ways: back to dinosaurs and ahead to Mars.

Postscript: Just read an extremely good tribute to the man in the New York Times.

Just read yet another, even better one, in McSweeney’s.