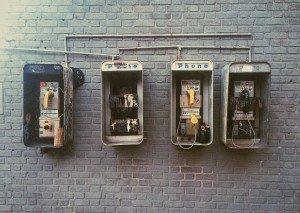 Four victims of the digital tsunami.

In January, the fifth edition of Hey Whipple is gonna come out.

I asked Edward Boches (digital smarty-pants from Mullen and now Boston U) to contribute and add his deeper digital smarts to the book. And he did. And with a whole lot of other revisions and new stuff, the 5th edition really rocks (if I say so myself).

Anyway, weird story: I’m putting the finishing touches to it last week and found I needed a certain kind of photo to kick off a chapter titled, “Surviving the Digital Tsunami.”

My first idea for the visual was a boarded-up Blockbuster store, but there aren’t any here in Savannah. Then Edward threw out the idea of an old pay phone. Perfect. Started lookin’ around online and found this PERFECT image of abandoned, inoperative, destroyed pay phones (above). But couldn’t find who owned the rights, and even if I did, the publisher probably wouldn’t pay for them. So I shrugged my shoulders and drove around Savannah to find a few old payphones to photograph; but my pictures sucked.

Cut to cool part: So I took that photo I’d found and put it on Twitter and said, “Help. Anyone have an image like this that I can use?” And wouldn’t you know it, an old student of mine, the lovely Sophia Magdalena Curtis wrote to say, “I see that same bank of dead payphones every day here in Brooklyn.  I just took this photo.Here you go.”

Day-um, you just have to love the interwebs. Thank you sooooo much, Sophia.

[Sophia tells me she recently left an agency job in Miami, and took a job as graphic/web designer at Sak Brand Broup in New York; said she “couldn’t be happier.”]