SuperBowl XLVII: How to blow $126 grand per second. 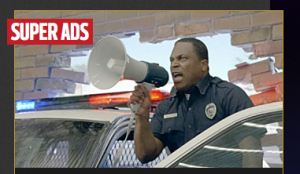 Everybody’s got their faves from the commercials on the Super Bowl. But let’s talk about the bottom feeders.

(Okay, fine. As for favorites, mine happened to end up pretty far down the list of the infamous USA Today Ad Meter: the spot for Oreos (“Whispering in the Library”) made it to only #26. I also happened to like #20, the silly argument between Seth Rogen and Paul Rudd for Samsung. Both spots had all the right SuperBowl-ness to them while at the same time building their story directly around product benefits.)

Nah, favorites have been done. But what about the bottom feeders?

Between you and me, I sure wouldn’t wanna be the brand manager at Calvin Klein who said, “Trust me, this is a Super Bowl spot.” Fact is, the CK spot would’ve sucked on the local farm prices report. Sue me, but I think fashion is the last great hold-out to good advertising. The whole fashion category still seems convinced advertising has to be flash without substance. As long as this belief persists, fashion brands will continue to be the bimbo of the advertising world.

I’m still scratchin’ my head about Anheuser-Busch’s three crappy spots. A-B usually occupies the top spots of the list but this year they stomped $11 million down a rat hole with three commercials that prove yet again your strategy has to be just right, before you do the creative.  In fact, it’s hard to find any strategy at all in the spot titled (ironically) “Here’s to Taste.”

The opening line? “We summoned the finest of this nation to help us taste and choose a golden amber lager.”

The helpful video shows us that the “finest of this nation” is a fake-roomful of AMW’s from Los Angeles. (AMW’s – “actress-model-whatever.”) Criminy. It reminds me of one of my favorite toasts — Steve Martin in the movie Roxanne: “I’d rather be with you people than with the finest people in the world!”

And yet, even after Anheuser hit bottom with “Here’s to Taste”, they kept digging the rest of their way to China with another commercial further defining “the finest of the nation.”

The VO says: “The loud. … The savvy. … The famous. … It took all of us to taste and choose the new Budweiser Black Crown.”

Seriously? Somebody needs to hang up a sign in Anheuser’s break room that says “Crack is for weekend use only.”

The final spot where A-B blew $3.8 million was for Beck’s Black Sapphire. Here the “idea” was a Pixar-like black goldfish sorta swimmin’ around the bottle. I’m guessing they got to this idea by first seeing the beer as “black gold” and then taking that > > > to black goldfish. (“Dude, a black goldfish. You nailed it!!”)

Typically, I never criticize other people’s work in public. Fact is, I’ve done some pretty miserable work of my own. Still, I’m making an exception of these three spots because Anheuser-Busch, … they should know better.

I’ll also happily make an exception to criticize the annual national embarrassments that are the commercials  from GoDaddy.

Yes, bringing up the rear — the spot with the poorest rating – was GoDaddy.  Once again, they didn’t disappoint and aired an execrable spot in which a curvaceous model French kisses a guy who has the skin condition known as rosacea; complete with the squirm-inducing wet sounds of a serious make-out. This isn’t marketing. It’s a drunk frat boy with $3.8 million to blow. Too bad, especially considering GoDaddy ran another spot that wasn’t about boobs or bad taste; it wasn’t half bad. Go figure.

In any case, there you have it. The five worst commercials of Super Bowl XLVII. They cost $11 million in media alone.

If only they had listened to my marketing plan I could’ve made these companies millions in cold hard cash. Here it is.