The Creepiest Client I (Or Anybody For That Matter) Ever Had.

One of the reasons I love advertising is it gets you on the inside of so many different kinds of businesses.

I have watched how Twinkies are made, toyed with the controls of the Goodyear blimp, explored the back hallways of a Norwegian Cruise Line ship, and had a man in a white coat at Purina explain to me with a straight face the difference between a “kibble” and a “bit”

Of them all, the strangest business I ever had the pleasure of exploring after hours was The Mütter Museum. Located at 19 South 22nd Street in Philly, the Mütter Museum began life in 1858 as a medical education facility. Today the structure still stands but houses instead a brooding collection of medical oddities, anatomical and pathological specimens, wax models, and creepy antique medical equipment – a list I’m tempted to end with the lyric of that song, “these are a few of my faaaaavorite things.” 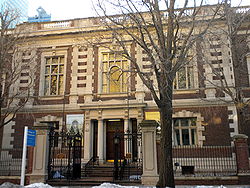 I’d read about this fascinating place several times and one day when things were slow at my agency, I decided to board a plane and visit the nice lady there who’d answered my emails, Ms. Gretchen Worden.

Over several trips to Philadelphia in 1999, I spent many delightful hours down in her dimly lit basement office chatting with this marvelous woman who was part professor, part historian, and part Stephen King. Sadly, Ms. Worden passed away in 2004. In fact, I heard about her passing only by chance while reading Sarah Vowell’s great book Assassination Vacation. Ms. Vowel, too, had travelled far to meet this woman who was a frequent guest on The Late Show with David Letterman displaying, said the New York Times, “a mischievous glee as she frightened him with human hairballs and wicked-looking Victorian surgical tools, only to disarm him with her antic laugh.”

As we chatted in her office, surrounded by shelves piled high with curiosities and objet d’creepy, she seemed happy someone had come along to help her promote the museum which her efforts eventually turned into a national visitors center.

What delighted me most about Gretchen was how she could move between being a horrified giggling rubbernecker and being the loving and respectful curator of this strange world of human pain. In a New York Times interview she said, “While these bodies may be ugly, there is a terrifying beauty in the spirits of those forced to endure these afflictions.”

Gretchen, I miss you. Thank you for inviting me into your dark and beautiful home.

“There are jars of preserved human kidneys and livers, and a man’s skull so eaten away by tertiary syphilis that it looks like pounded rock. There are dried severed hands shiny as lacquered wood, showing their veins like leaves; a distended ovary larger than a soccer ball; spines and leg bones so twisted by rickets they’re painful just to see; the skeleton of a dwarf who stood 3 feet 6 inches small, next to that of a giant who towered seven and a half feet. And ‘Jim and Joe,’ the green-tinted corpse of a two-headed baby, sleeping in a bath of formaldehyde.” –New York Times, 9/30/2005

Here’s the thing. If you can’t make a couple of cool posters working with a product like this, hang it up, dude.

In fact, a quick aside if I may?

Let’s agree that doing advertising for “clients” like this is fun. Let’s agree that it’s a lot easier than real advertising where there are no committees to sell through, no quarterly sales goals, and no shareholders. But to nerdy creative geeks such as myself, projects like these are a joy to work on because they allow us to show off a little bit; to have some fun.

Let’s also agree that work for “clients” like this has, of recent, muddied the waters of award shows competing as they sometimes do with legitimate paying accounts. Let’s hope that someday award shows will figure out how to celebrate the creativity of these one-offs without pitting them against real work.

That said…here are the five posters we did for Ms. Worden and her Mütter Museum. I say “we”  only because I was the creative director (traveling sales guy and account person). The real work was done by the talented Atlanta team of writer Scott Biear and art director Clay Davies. The photos were a donation, courtesy of Andrew Zuckerman.

In the end, we didn’t have to worry whether our fake-client work displaced any real-client work from the award shows. They never got in; not in a single show. Perhaps the judges were tired of seeing work like this. Or perhaps the work simply isn’t as cool as I think it is.

In any case, Scott, Clay and I, we have no regrets. We had fun doin’ it. And here I am eleven years later fondly remembering both the work and the lady we did it for, Ms. Gretchen Worden. 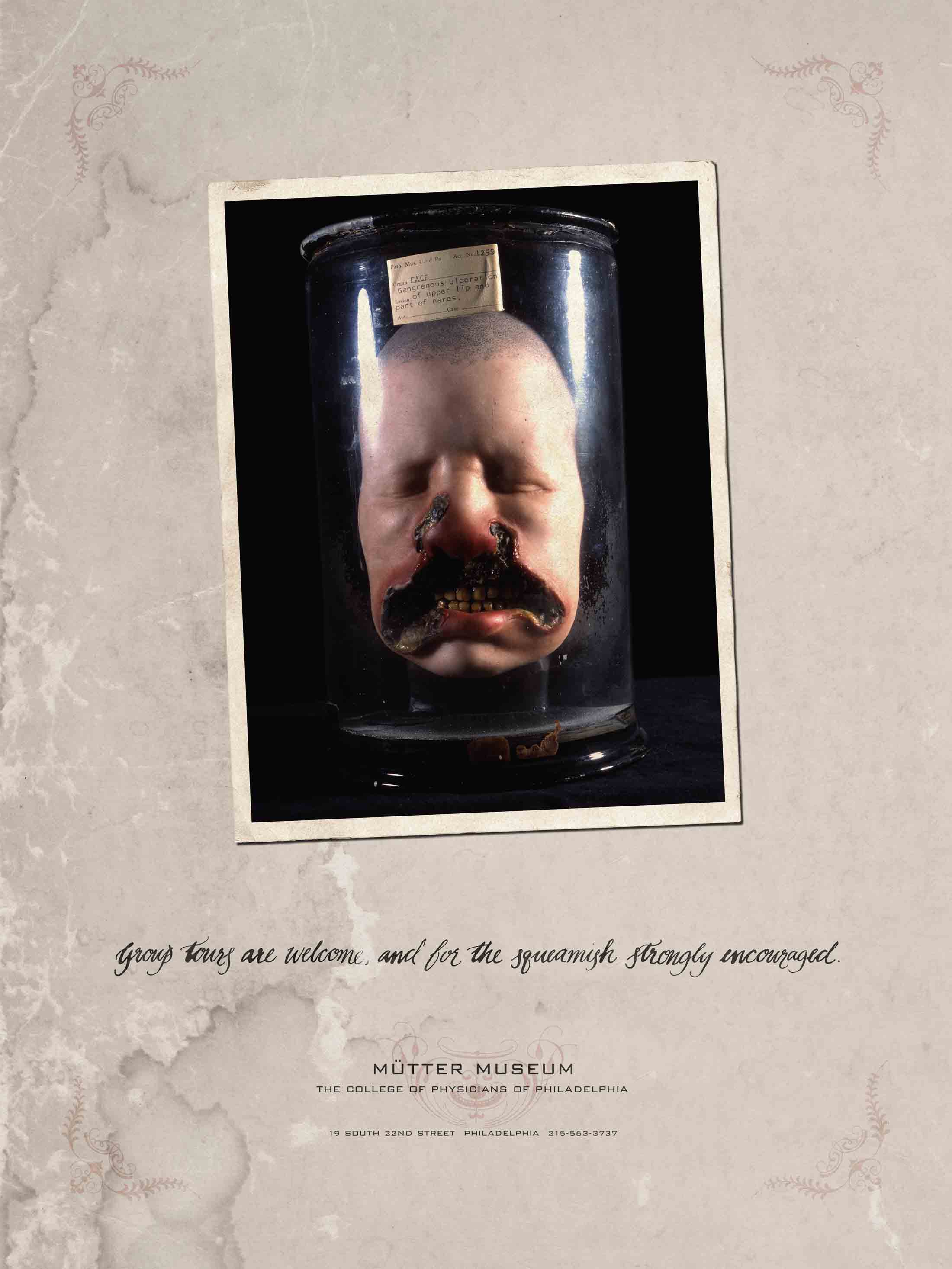 HEADLINE: Group tours are welcome and for the squeamish, strongly encouraged., 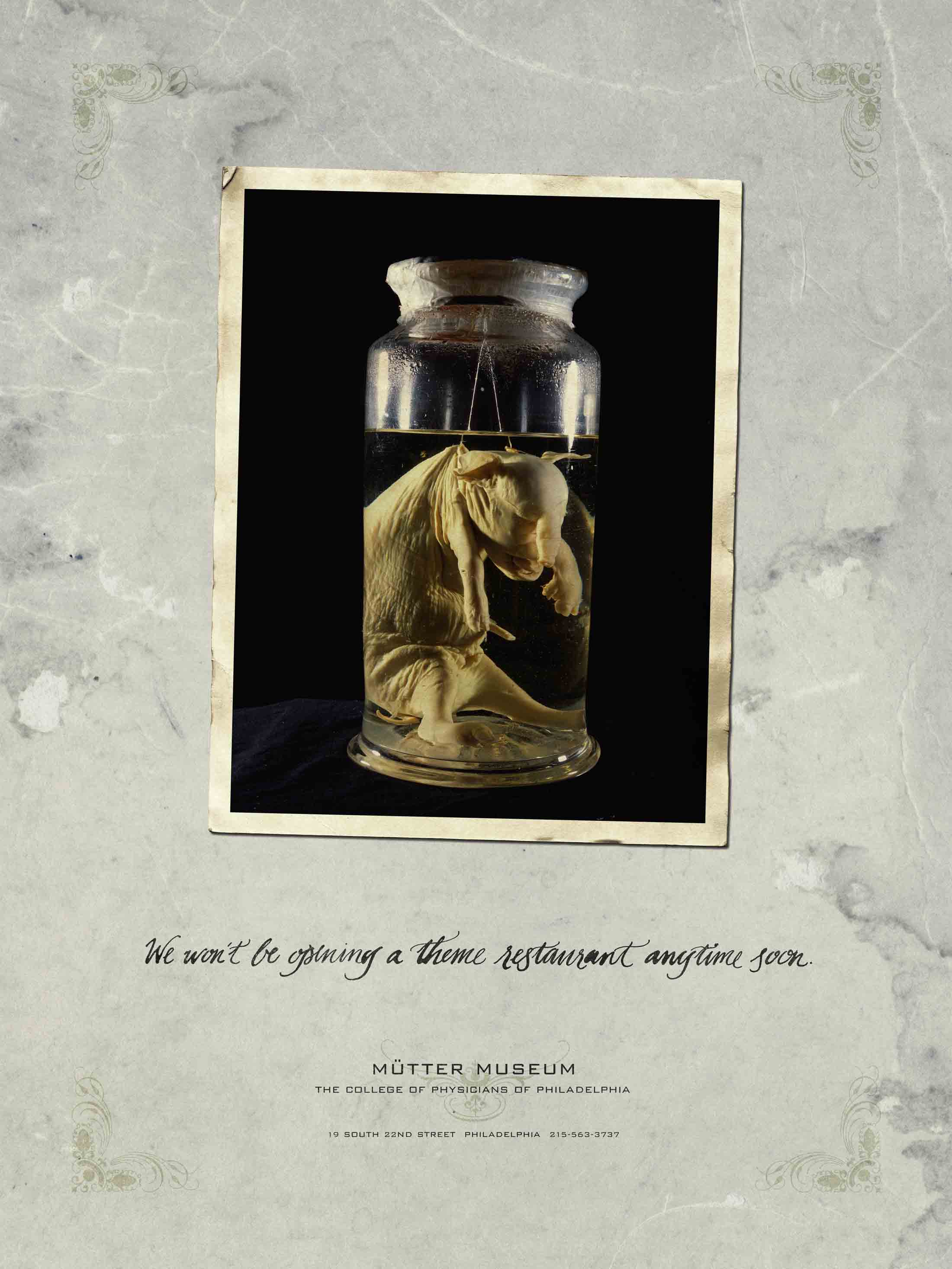 HEADLINE: We won't be opening a theme restaurant anytime soon. 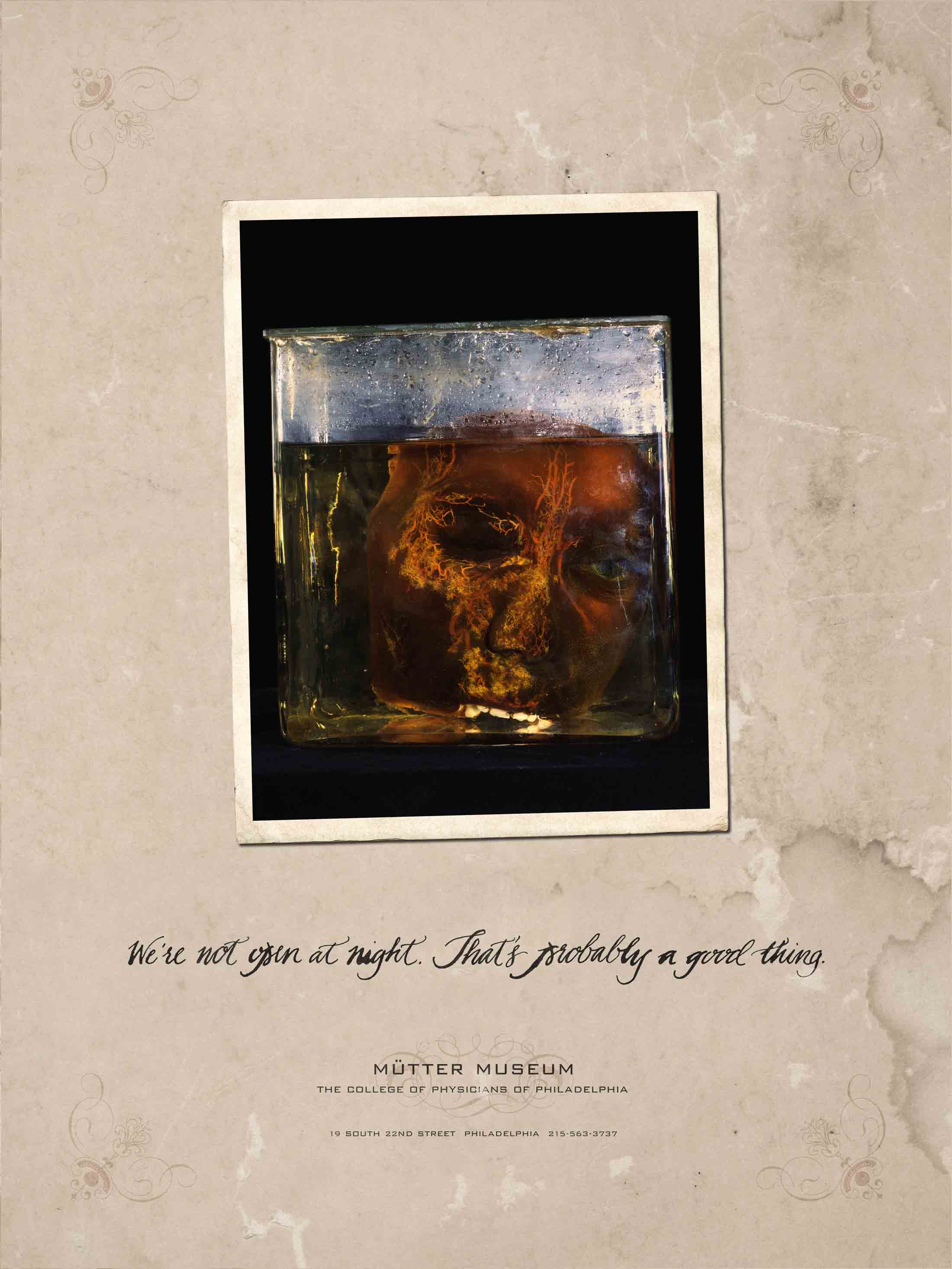 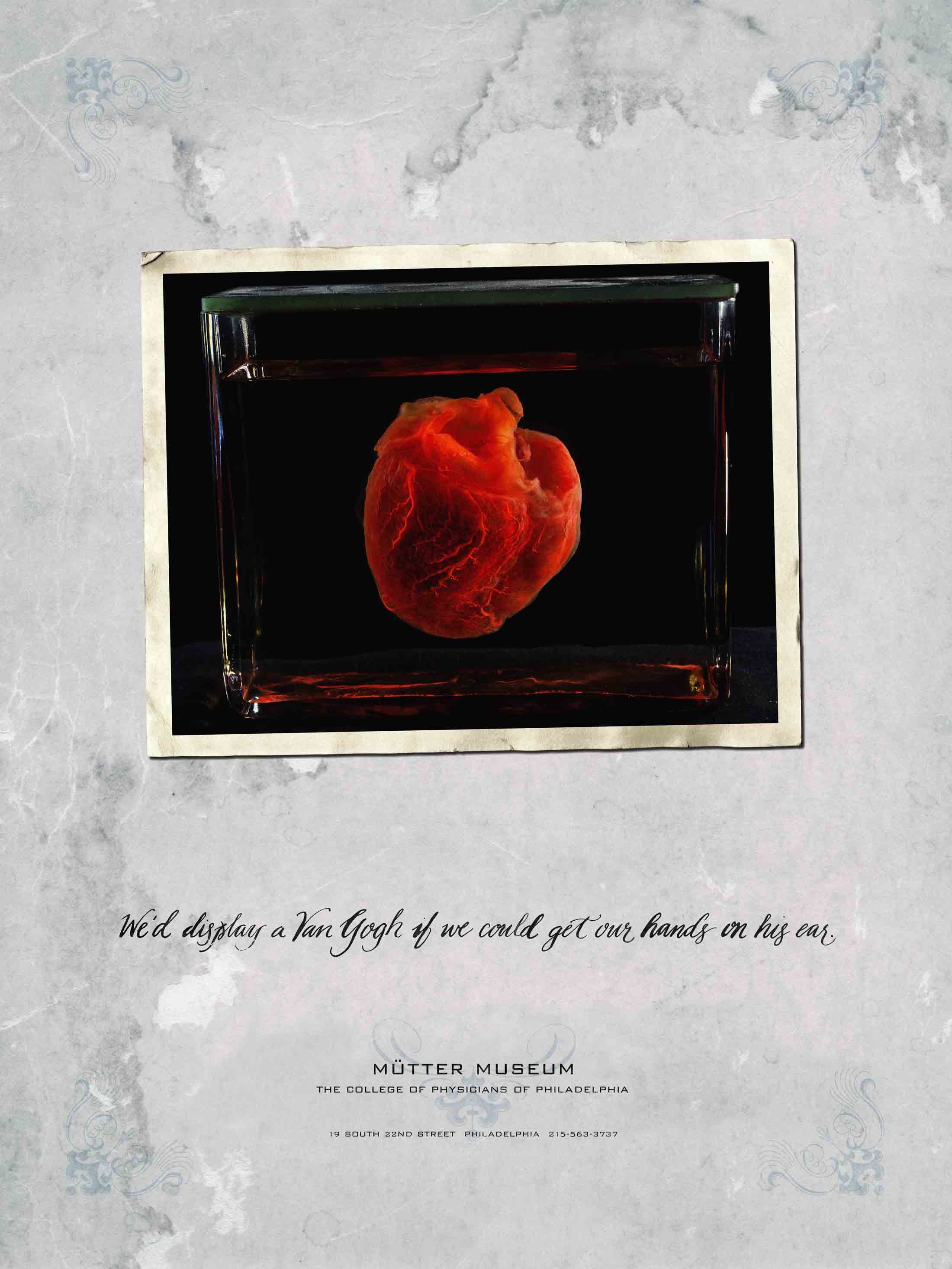 HEADLINE: We'd display a Van Gogh if we could get our hands on his ear. 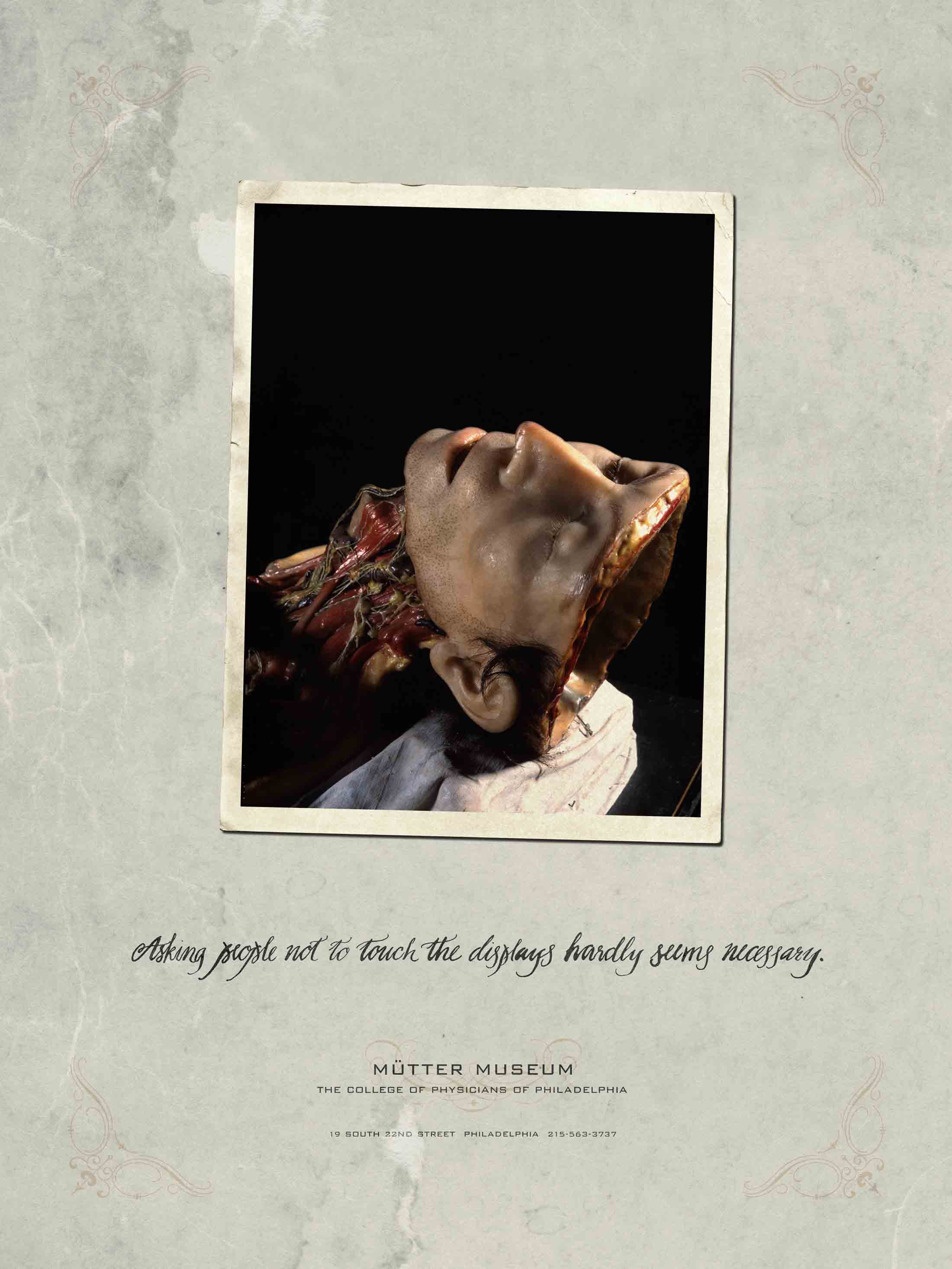