Top 5 Tweets from folks in Jacksonville. (Frankly, some of these people were just mean.) 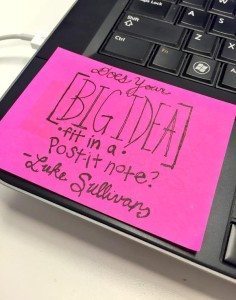 Just got back from a fun speaking trip to Jacksonville and their AAF club. As always, I tell the audience I’ll send a signed copy of Hey Whipple, Squeeze This to the person who writes the funniest tweet during the talk.

And by funny, I told ‘em, hey, if you think I suck, post “heywhipple kinda sux. #overrated.” Really, any comment that’s mean-spirited or disrespectful will be received warmly.

Placing fifth in the race for the book (valued at nearly $16) was CS @JaxRunner who tweeted:

The judges chose this because, well, if you weren’t there at the talk, this tweet makes no sense and is in fact kinda creepy, in about four different ways.

Placing fourth was this:

Stephanie Mack @Smack_Talks @heywhipple knows a ton about reaching target audience through every medium except that tech bullshit. #wheresmytypewriter?

Clearly a cheap shot at the unavoidable I.T. problem I experienced, as well as at my advanced years. Judges appreciated the final jab in the hashtag.

Eddie B @EdwardBerrang The Matrix obviously wasn’t a fan of your dig on Part 2 & 3 of the series. No sound for you.

Right before having the tech problem with sound I did, in fact, have a few bad things to say about the second and third Matrix movies. Mr. Eddie B saw a causal relationship between the two events and astutely rode the coat-tails of Stephanie Mack’s earlier remarks about the IT issue.

(NOTE: Mr. Eddie B was the most frequent Tweeter and the judges are pretty sure he didn’t really listen to the speech.)

Adjective & Co. @adjectiveandco @heywhipple, I am taking my A-team to see you tomorrow. You better not suck. – Taylor

Not because it was particularly funny, although the judges did give it good scores for its abusive undertone. Nor was the tweet sent during the speech, but the day before. No, the tweet placed because I know Taylor Harkey from our shared time at GSD&M. So it was nepotism and brown-nosing.

Kingsley Spencer @KingsleyPrints Lobby conflict: Why does Ruth own Chris? #heywhipple PS- thanks for the awesome lecture.

Two reasons Kingsley’s tweet rung the bell: First off, you’d only get this joke if you saw the Ruth’s Chris Steakhouse sign that was sitting on a table in the hallway where they were doing remodeling. And the question has merit, people. WTF? What is the deal with that name? Yo Chris, why be Ruth’s bitch. Man up, dude.

Oh, also, it didn’t hurt that they said thanks for the awesome lecture. The judges appreciate being pandered to.

I had a blast everyone. Hope you enjoyed yourself. Kingsley Spencer, please ask my wonderful host, Aerien Mull, to mail that copy off post haste.