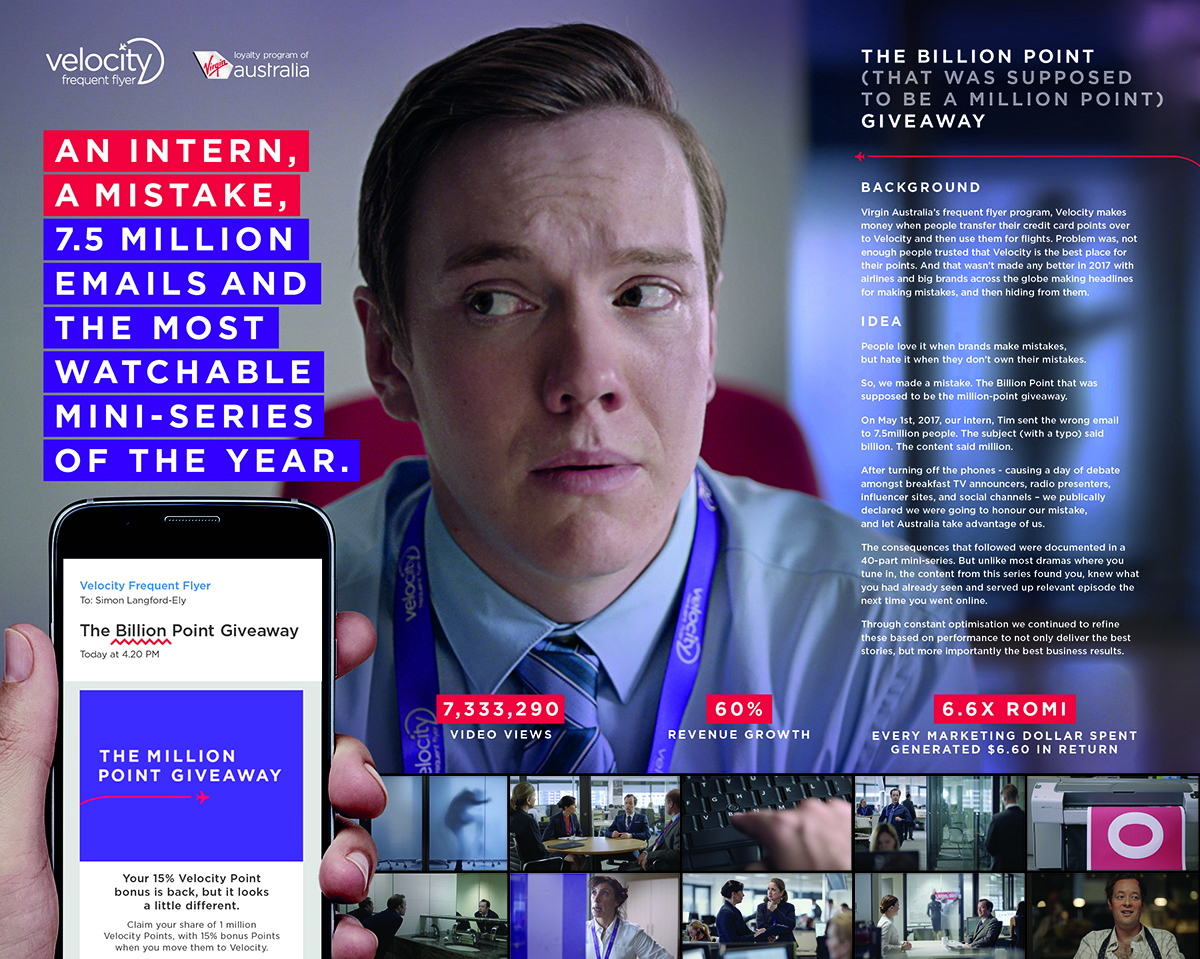 Your cool idea cannot just be a “brought to you by the makers of” thing. It has to come from, be inspired by, and carry the brand DNA itself. It must also be relevant to the target audience. PJ Pereira says, “If you make it impossible to talk about the idea without the brand, yet make it interesting enough to generate some buzz, you have something special on your hands.” His observation almost perfectly describes an extraordinary branded-content campaign from CHE Proximity for Virgin Australia Airlines.

In a spoof which felt like a series of episodes from The Office, the campaign pretended an intern working in the airline’s frequent-flyer-rewards division, Velocity, had made a mistake announcing the big new “Million Point Giveaway.” In an email sent to half of Australia, it was mistakenly called the “Billion Point Giveaway.” (You know, just a small typo, really.)

Hours later, the airline sent another email headlined, “1 Billion Points, what were we thinking?” But the copy below it promised, “After speaking with our lawyers, we’ve decided to honor the mistake and commit to giving away all of the 1 billion points.” Then the real campaign began.

The agency created 40 different videos documenting the trauma happening inside a TV-version of the airline’s rewards department. Said creative director, Ant White, “Our biggest creative opportunity these days is to find ideas that allow us to create content to stay watchable for [a] long period … We wanted to make this work feel like we were covering a ‘live event,’ rather than creating a couple of films that lose relevance over time.”

Over the month the campaign ran, the name of the giveaway changed from “The Billion Point (That Was Supposed to be the Million Point) Giveaway” to “The Billion Point (Deny It Happened. What Billion Points?) Giveaway” and even “The Billion Point (Now Hiring New Interns) Giveaway.” People shared the videos online and ultimately it was the most successful rewards campaign in the airline’s history, returning $6 for every $1 the brand invested in it. What makes it even more brilliant was the strategic issue which led to the whole idea: research had shown not enough Australians trusted Virgin’s rewards program.

After this, they did.